Did you catch the darts on the weekend? Players Championship 5 & 6 from Milton Keynes? Michael van Gerwyn won his 6th tournament of 2018 on Saturday. He beat Chris Dobey in the final. On Sunday, it was jewels for the 'Diamon.' Ian White went the distance with Dave Chisnall winning 6-5 to claim his 8th career title. It was great action and there were some excellent outcomes for Irish players, especially on St. Patrick's Day!​ 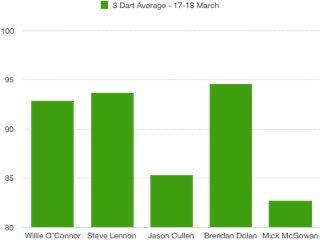 I'll start off by talking about Mick McGowan. Mick had a difficult weekend, failing to get past the First Round on both Saturday (to Canadian John Part) and Sunday, leaving him with no money for the weekend. He has been struggling recently so maybe this was to be expected. Mick's 3 Dart Average over the weekend was a disappointing 82.7, his best average coming in his loss to John Part (87.2) with his worst being 76.8 in his 6-0 loss to Adrian Lewis. He only hit 18.8% of his doubles, 33% against Part, but he failed to hit any against Lewis (0/7). He only hit 2 180s and also only won 3 of the 15 legs he played. On the PDC Order of Merit, Mick has dropped outside the Top 64 for the first time this year, down to 65th with £44250. On the Pro Tour, Mick is in 76th, with £9250. Only the Top 64 retain their Tour Card for next year and with a lot of money to be lost at the end of the year, things will have to pick up, or else Mick will find himself without a Tour Card at the end of 2018 and going to Q School.

Moving onto Steve Lennon now, and Steve will be relatively happy with his weekend's work. He reached the Last 32 on Saturday before running Michael van Gerwen close on Sunday. It seems to me as if Steve is just about to reach a semi final or even final very soon. Steve's average of 98.8 against van Gerwen was his best, while his 89 average against Wayne Jones was his worst. His total 3 Dart average for the weekend was a decent 93.7. Steve hit 50% of his doubles in his win over Whitlock, but only hit 27% against Wayne Jones, which cost him the match. He hit 41.3% of his doubles over the two days (anything over 40 is excellent). Steve won more legs than he lost, 19-17, and also hit 8 180s (2 per match). These impressive stats prove what I said earlier about his potential to reach a semi final or final soon. On the PDC Order of Merit, Steve remains 59th, with £50250, while on the Pro Tour, Steve has moved down to 46th, with £21500. Steve is safe from losing his Tour Card this year, because of the fact he is not losing any money. The OOM works on a 2 year rolling basis and with Steve only starting his 2nd year on tour, it is an amazing opportunity to burst into the Top 40 (or maybe even 32) by the end of the year. ​ 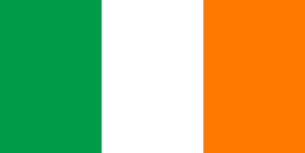 Brendan Dolan also had a decent weekend, reaching a second Last 16 in a row on Saturday before losing out to Ricky Evans in Round 1 on Sunday. Brendan is the most well-known of my Irish players, having famously hit the 1st televised Double-in 9 darter (hence the nickname 'History Maker'). He has since dropped outside the Top 32, but seems to be regaining his form. Brendan played 5 games over the weekend, with his best average being an excellent 99.9 in his 6-4 loss to Gabriel Clemens. His worst was 86.2 in his 6-4 loss to Evans, but his total 3 Dart Average for the weekend was an impressive 94.6. Brendan hit 60% of his doubles when beating the World number 2 Peter Wright, but only hit 31% against Evans. Over the 5 games, Brendan hit 44.1% of his doubles (easily Top 32 standard, potentially Top 16). Brendan won 26 out of the 44 legs played and hit 7 180s (1.4 per match). Impressive stats, with some more performance like these, how long will it be before he catches Wilson and Pipe on the Order of Merit. Speaking of the PDC Order of Merit, Brendan is the highest of the lads on it, in 36th. He has £110750, after he earned £1500 on Saturday. On the Pro Tour OOM, Brendan is up to 53rd from 56th, with £18250. If he keeps rising up the Pro Tour OOM, he qualifies for more TV events, which means more MONEY, MONEY, MONEY!

Last but not least, let's talk about the man from Limerick, Willie O'Connor. Willie had an amazing Saturday, reaching the Quarter Finals, before going out to Ron Meulenkamp in Round 1 on Sunday. Still, the £2250 earned on Saturday will (hopefully) keep Willie happy, until he plays again, of course! Willie's best average came against Adrian Lewis, in his 6-3 win. He averaged 96.4 in that game and also hit 46% of his doubles. His worst average was 86.1 in his Quarter Final loss to Ryan Searle. Willie hit a class 67% (6/9) of his doubles against Toni Alcinas but could only hit 35% against Matthew Edgar (he still won 6-4). His overall checkout % for the week was a brilliant 44.3%, while his total 3 Dart Average for the weekend was 92.9. He won 31 out of 56 legs played and hit an excellent 18 180s (3 per match). These stats are also ever improving, so don't think the Quarter Finals is the furthest Willie can go. I'm convinced he can win a Players Championship some day. On the PDC Order of Merit, Willie has moved up 2 places to 55th, with £54250. Meanwhile, he also moved up on the Pro Tour, 8 places from 58th to 66th, after earning £2250 on Saturday. Another excellent weekend from Willie, he is producing great darts consistently. After qualifying for his first PDC World Championships last year, I don't see any reason why he can't do it again.

'Player of the Week'

My Player of the Week goes to Willie O'Connor. He won 4 impressive matches on Saturday to reach his first Quarter Final of the year, and having moved up a couple of places on the Order of Merit, he seems a certainty to be in the World Cup team. Great stuff Willie! Thanks for reading everyone. If you disagree with my Player of the Week, or want to ask me anything about Irish Darts, please tweet me. Thanks to High Roller Radio for having me, I'll be back again next week. 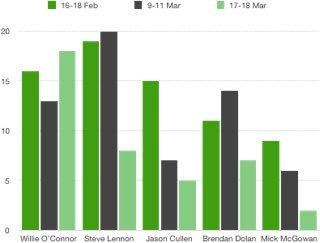 Jason Cullen is also going home a relatively happy man. Jason lost out in Round 1 on Saturday, but an amazing win over Premier League star Michael Smith surely left him with a smile on his face. It's Jason's first year on the Pro Tour, and he doesn't even hold a Tour Card! But I'll explain why he's allowed to compete later. Jason's averages this week show he is slowly getting used to playing on the PDC circuit. His best average of 87.5 came in his amazing 6-3 win over Michael Smith, but he only averaged 81.6 in his 6-2 loss to Jermaine Wattimena on Saturday. His best doubles % also came against Smith, 6 out of 13, an impressive 46%, but he only hit 12% (2/17) of his doubles against Wattimena, surely costing him numerous legs. His total 3 Dart Average for the weekend was 85.3, while he hit 30% of his doubles (down from 36.8% last week). Jason won 12 legs to 15 lost and hit 5 180s (1.6 per match). His ever improving stats surely point to some more wins on the Pro Tour, and potentially a rise into the Top 100 quite soon. As I was saying earlier, Jason doesn't have a Tour Card for 2018, he missed out in Q School by just 1 point! Officially, Jason is a Challenge Tour player and he has already proven his worth there by winning Challenge Tour 4 in Wigan. His form on the Challenge Tour is important because the Challenge Tour Order of Merit decides who plays on the Pro Tour when there are absentees. Jason is currently 5th, meaning he is the 5th person called if there are people missing. On the actual PDC Order of Merit, Jason lies 142nd, having already earned £1250 in a couple of events. He won't losing money for 2 years, so I'm certain Jason will climb the ranks into the Top 100 and maybe Top 32 soon! 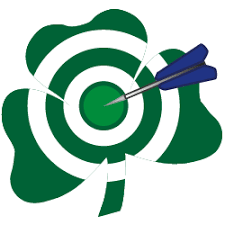