'The Hammer' Readies Himself for Return to UK Open

Alright High Rollers, very excited to be joined by a guy who recently tweeted out “I’m not done with the PDC just yet!” He’s played and beaten the very best in the world. He's a world championship semi finalist, 2007, and finalist, runner-up in 2012. He's thrilled crowds in the Premier League and he won the Players Championship Gibralter. It's been a stellar career for Andy Hamilton and now, after winning one of the Riley’s amateur qualifiers, he's secured his spot at Butlin’s MInehead & the 2018 UK Open. Welcome to the show Andy, thanks for being our High Roller today.

AH: Thanks for having me.

Q: You recently tweeted out that you're "not done just yet with the PDC!" How good did it feel to not only win the qualifier but then send that tweet out into the universe?

AH: It was a great feeling, it's the best result in terms of winning for quite a long time overall. It was a field of 120 players so I had to win 7 matches to get through, it was only best of 7 and I'm used to best of 11 so you don't get any chance to settle in the match. It felt awesome to put that tweet out though, taking a year away wasn't an easy option so I'm glad of the opportunity to play in the UK Open.

Q: Obviously your game is in good stead. How did it go for you in Worcester?

AH: I played pretty well there to be honest, I'd only got home from Australia on the Tuesday evening, I'd spent around 38 hours travelling to get home and the jet lag had fully kicked in; I was waking up at all sorts of times, I was pretty pleased with my game there considering.

Q: So what are you hoping for at the UK Open and beyond in 2018? Do you set goals for yourself?

AH: I want to prove my game is still there, I know I've got the ability still, I believe in myself, I know I can do well at the UK Open it's a great venue and I've done rather well in the competition before. This year I want to get everything right, get rid of any little niggles that don't help at all, and come back in 2019 even stronger. I'll play the BDO circuit and learn to love the game again.

Q: You went through a bit of a rough patch there. You missed the UK Open last year and lost your PDC tour card. How frustrating has it been for you the past few years, knowing that you’ve got the game but it just hasn’t been produced to the level you’d like it? And, you opted out of playing Q School this year. Was that a difficult decision for you?

AH: it's been devastating to be truthful, as a player it's got to be one of the worst things that can happen. Your confidence gets knocked, you don't know how to put things right and losing becomes a habit. I made the decision to step back, I'd spoke to a few people and listened what they had to say; I decided to take the pressure off of myself by not going for the tour card; I was confident I could win one but if I hadn't I'd have been in a place 100x worse. I've dropped away from the main tour and I've stopped the rot, I'm starting to enjoy darts again, fixing my personal issues and effectively starting again, the BDO is going to help me massively it allows me to play competive professional darts without the intensity of the PDC circuit, and I mean in a way that if I don't play every pdc event I'd get left miles behind in terms of rankings whereas with the BDO's system I can concentrate on the category B, A and A+ events, they're not every week so its less intense.

Q: We’ve seen the prize money escalate on the PDC Tour. We’ve seen the standard increase, so many guys week in and week out vying for their piece of the pie. How tough is it out there, seems like a blood sport?

AH: Darts is growing massively, Barry Hearn, Matt Porter and Matchroom are doing a fantastic job moving this sport on so far on a global stage. It's getting tougher though, there's more at risk with every game and sometimes I think it's showing as every now and then you see the odd temper flare, sometimes it can seem that gamesmanship is coming into the game more and unfortunately it's natural because of what's at stake.

Q: A buddy of mine just got back from PDC Q-School and he said he played a warm-up event, at the corner pub, and there were 3 guys there who had PDC tour cards. The corner pub? You see guys like Corey Cadby coming up, throwing 140’s for fun on stage. Are you amazed by what you’re seeing these days in darts?

AH: I've not heard of the corner pub but if you've got 3 TC holders playing there they must have a pretty good set up! Corey Cadby has got a great talent, I thought he was a stage player but I've seen the recent results and it looks like he's just as good on the floor! I spent a lot of time in Australia with Dimitri van den Bergh and I have to say what a great lad he is, he's got a very mature head on his young shoulders, he's been around a little while now and he's using all of the experience he's gained very much to his advantage, I'm looking forward to seeing how much further he goes, he's got the talent.

Q: Wondering your thoughts on the Adrian Lewis situation? He lost his cool at the oche?  There’s a guy who’s had his own frustrations the past few years. He’s the guy who beat you in the world championship final in 2012. You’ve been up there with him in the heat of the moment?

AH: Thats the pressure cooker for you, Adrian has dropped in the rankings and he's a far better player than where he sits, it's unfortunate that he's in this pressured situation due to his personal problems. I've known Ade since he was about 19 playing darts in a pub called the Grove in Stoke on Trent, I've never seen him react like that but as I say it's the pressure, what he's done was wrong and he's admitted that but I guess sometimes things just boil over.

Q: When you reflect back on that world championship run. What stands out the most for you? tThe Simon Whitlock comeback? I mean, you ran through so many great players; Antonio Alcinas, Vincent van De Voort, Dave Chisnall, Kim Huybrechts. Then you came back on Whitlock and played for the world title. It’s gotta hold a special place in your heart?

AH: The Whitlock comeback in the semi finals stands out a mile, I fought my way through that match and got a well earned place in the final. Someone pointed out to me I played a different nationality in every round on my run to the final, Ade was the second Englishman, I could've done without him to be honest haha! I'm proud of myself getting to the final though not everyone can say that.

Q: Phil Taylor has retired. You’ve had many clashes with him over the years. What did you make of how he left the game, another world final? What has he meant for the game?

AH: Phil Taylor's name is the definition of legend when it comes to darts, it's unbelievable what he's achieved, I watched the final and I was kind of gutted for him not to go out on top of the world. He's done so much for darts and deserves his rest now, he needs to have a bit of me time!!

Q: You’ve got some great sponsors; XQMax, Prima Darts, LoveTheDarts(Brecon) and D-MAC. Tell us about your sponsors, good to have that support right?

AH: My sponsors have been great for me they've stuck by me through these tough times. 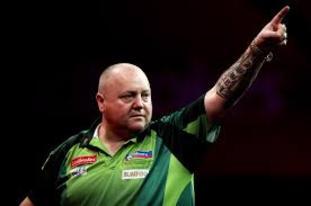 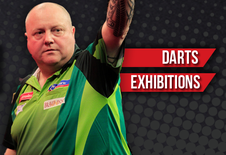 Not Done with the PDC Yet!

High Roller Radio interviews Andy 'The Hammer' Hamilton, who looks to leave his mark at the UK Open.

Be sure to check out Andy's sponsors: 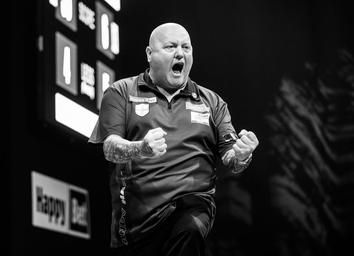