Ultimately, Arsenal have failed this season and anything less than a second-placed finish will constitute a poor campaign. Wenger's men were well fancied at the start of the season, especially after beating Chelsea 1-0 in the Community Shield curtain-raiser back in August. However, the Gunners have failed to inspire confidence on all fronts. They were knocked out of the Capital One Cup by Sheffield Wednesday, slipped up at home against Watford in the FA Cup and succumbed to the might of Barcelona in the Champions League. However, the Premier League title has always been their number one priority this season. Arsenal haven't lifted the English crown since the days of Thierry Henry, Patrick Vieira and Dennis Bergkamp and many believed that this would finally be the year for Wenger's men to return to the summit of English football. Unfortunately for Arsenal, it simply hasn't worked out that way. The Gunners have been uninspiring for large chunks of the campaign and when the pressure has been cranked up, Wenger's side have crumbled. Ah well, there's always next season...

Sir Edmond Hoyle
Thank him for the Rules of the Game!  The phrase "according to Hoyle" came into the language as a reflection of his generally-perceived authority on the subject. In the time since Sir Edmund, the phrase has expanded into general use in situations in which a speaker wishes to indicate an appeal to a putative authority.

Fun Fact: Sir Edmund Hoyle is a member of the Poker Hall of Fame!

The Gunners are struggling for confidence right now but Wenger's squad remain in control of their own destiny. It could be argued that Arsenal, who still need to play three of the Premier League's bottom four, have the easiest run-in but there are no straightforward fixtures at this stage of the season. As of April 17th, Arsenal are 1/14 in the online betting markets to finish in the top four this season but both Manchester sides will push them close - especially if United continue to scrape results whilst playing poorly.

Arsenal Face a Fight to Remain in the Top Four!
After showing plenty of promise in the opening half of the season, Arsenal are now fighting to keep their place in the Premier League’s top four.

Despite dominating for the majority of the game, Arsene Wenger's men slipped up against Crystal Palace in their most recent encounter and now sit just four points above fifth-placed Manchester United. Can the Red Devils pip Arsenal to that fourth and final Champions League spot or do the Gunners have enough quality to hold on? 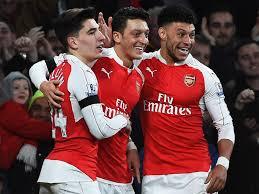 In the meantime, Wenger must try and rally his troops ahead of what could be a tricky end to the campaign. While they still need to play Sunderland, Norwich City and already relegated Aston Villa, these fixtures are usually difficult as those clubs fighting relegation still have something to play for. Manchester United and Manchester City may earn straightforward wins against those sides in holiday mode, including Stoke City, Southampton and Swansea City. There are no easy games in the Premier League but many players will already have one eye on this summer's European Championship.

If Arsenal finish outside of the top four this season, Wenger has to go. Most Gunners fans believe that the Frenchman's tenure should come to an end sooner rather than later and this could be his last act as Arsenal boss. There are no excuses for Arsenal's poor campaign and a fifth-placed finish would be a disastrous way to end one of the most disappointing seasons in the club's recent history.