“Hold’em is to Stud what Chess is to Checkers.”
- Johnny Moss, Hall of Famer and 3-time world champion. 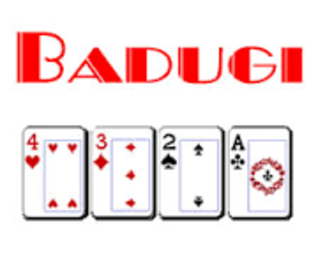 3 Things Achieved by Re-Raising
1) It knocks out other players (unless they have very good hands or are a calling station) and increases your chances of winning the hand
2) It usually allows you to play versus only one villain increasing the likelihood you win.
3) It allows you to take the Lead in the pot, and considering the flop normally doesn’t help anyone you will be in much better stead to fire a continuation bet and take down the pot.

Poker Truisms
1) Poker is a game that goes on within. Control yourself and you will win.
2) Put yourself in their shoes before you decide on the best way to take their shirts.
3) A poker game is a test of your skill against your opponent's luck.
4) Don't try to beat the other players. Let them try to beat you.
5) Luck is a good poker player's worst enemy.
6) Over the long run, those who win the most pots lose the most money.

Badugi is a very unusual variation of draw poker. Each player only gets 4 cards and they are vying for the low hand – not the high! Like triple-draw poker, there are 3 drawing rounds. So, what makes a winning Badugi hand? The best Badugi hand is Ace-2-3-4 of four different suits. In Badugi, straights do NOT count against you for low, but matching suits do.

Bad Beats & Bad Bets!
When I was a teenager I’d make a lot of bets with my father. Five dollars on a 10-foot putt, ten bucks on the name of a song, another 10-spot on a pool shot. Would I make the 8-ball 20 bucks, you get the drift. Well, it wasn’t too long before I was into him for over $100. Then, it was 160 bucks, 180, 205 and so on. I’d win a wager here and there but I mostly lost. Sensing I had the gambling bug, pops laid it on the line one day while we were on the golf course; should I have the misfortune of ever owing him $500 he would wipe the slate clean but only after punching me in the face. Yes, a good old-fashioned knuckle sandwich. It might be a strange way to teach a kid a lesson but it was certainly an effective technique. I am now an adult and I still owe him $497, have for 30 years. I’m pretty sure the next wager will hover around the $2.90 mark. It’ll have to be a sure thing - Dad’s got a pretty good right hook.

1. Each player is dealt four cards face-down. After each player checks their hand, a round of betting occurs.

2. After the betting is complete, each player is allowed to choose 0-4 cards to discard and draw new cards. In other words, players can exchange either all or none of their cards.

Remember:  Getting a four-card hand is better than any three-card hand, so think carefully about trading a high card in a four-card hand in hopes of getting a lower card, especially in later drawing rounds.  By "staying pat" and drawing no cards, you will appear to have a "badugi" -- a four-card hand, which is a smart way to bluff opponents.  The worst hand that is still a "badugi" is K-Q-J-10 of different suits. The very worst hand of all in Badugi is K-K-K-K.