Unlike the ‘Call’, the ‘Raise’ can win you the pot in two ways instead of one. When you call you must have the best hand at showdown to claim the pot.  However, raising gives you a couple of chances to win; the other player may fold, in which case you have fun stacking chips, and if he/she calls you can still win with the best hand on the river. An opening bet is considered a ‘Raise’ for strategy purposes here.  If an opening bet is raised again that's referred to as a “Re-Raise” or ‘3-bet.’

Why Raising is Crucial
1) To inflate the pot.  Raising allows you to get more chips in the middle when you're favoured to have the best of it.  Bet-sizing is important here because in many cases you are ‘Raising’ for value.  It's hard to make a good hand in Texas Hold;'em, so this is where you get value.  Bump the bet when you have thr goods!

2) To drive out opponents!  If you have what you think is the best hand, but you consider it vulnerable to drawing hands like straight or flush draws, you may want to raise the pot to 'protect' your hand.  Also, with pocket Aces, or a strong holding like that, you may raise to eliminate players in the hand.  Some hands fair much better against one or two opponents.  It is proper to entice folds because they may get there on the turn or river.

3) To bluff or semi-bluff!  Raising the pot may cause better hands to fold.  This is a good thing.  Make them believe you have ‘The Nuts.’  In the case of a semi-bluff, if you are called by a better hand you may still make your hand on a later street and claim the pot.  Remember:  Always leave yourself an out!  Semi-bluffs often lead to winning or losing large pots.  Even if your opponent has the best hand, many times you can entice a fold by making a large ‘Raise’, effectively making them believe you have the goods.

4) To get a free card:.  If you flop a flush draw and are in position, it might be worthwhile ‘Raising’ a bet fired at you because many times your opponent will check to you on the turn, respecting the strength you’ve just shown.  If you miss your flush card on the turn you can simply check behind and get a FREE river card.  Note: You must be willing to lsoe the raise, or continue raising the turn, if you miss your flush card.

5) To gain information. You may consider raising to see what your opponent does, to gauge how they react to your raise.  You are trying to determine the strength of your opponent’s holdings.  Again, they may fold in this spot and you win.  If they ‘Re-Raise’ you, you can safely assume a fold is correct.

6) To drive out better hands when a 'Come' hand bets.  If your opponent is betting an apparent drawing hand and another player raises, you can re-raise and it's likely the players behind you, those yet to act, will fold decent holdings.  This is also known as an 'Isolation' or 'Squeeze' play.

How to Utilize the 'Call'
There are several reasons for calling a bet or raise:

1)  To see more cards. With a drawing hand you want to see that next card, potentially a winner for you, and you want to do it as cheaply as possible.  Calculate your pot odds and if you are receiving the right price make the call.

2) To limit loss in equity. Calling may be appropriate when you think you’re beat but the pot odds suggest a call is correct in the long-term.

3) To avoid a re-raise. Calling denies the original bettor the opportunity of re-raising a monster holding.  There is nothing worse than raising with an open-ended straight and getting re-raised all-in for your chips.  When you do call an opponent you are showing strength, suggestinmg you do have 'value' in carrying on witht the hand.

4) To conceal the strength of your hand.  If you flop a monster, like a flush or full house, or are holding pocket Aces, sometimes a smooth call may be appropriate, not only to mix up your play but to extract maximum value as well.  A call can disguise your holdings in a way a raise can't.  Slow playng in this fashion may win you more money on later streets.

5)  To manipulate pot odds.  By calling (not raising), a player offers other opponents, those yet to act behind you, more favorable pot odds to also call and increase the pot.  Your call gives them the right price to play.  If you have a straight fush draw you'll likely want as many players in the pot as possible.  If you hit it's better to hit when more players have contributed to the pot.

6)  To set up a bluff on a later street.  For a long time this was referred to as a 'long-ball bluff' but these days it's known as 'Floating', calling in early betting rounds to bluff (or semi0bluff) in later betting rounds.  Done right, your opponent will check and you will fire away and claim the pot.  Floating can be extreemly profitable.

Hand Reading & Tells
‘Hand Reading’ is a crucial and required skill in the game of poker; the process of making educated guesses about the possible holdings of your opponen.  You try to make the best read based on the sequence of actions in the pot.  A ‘Tell’ is a detectable change in an opponent's behavior or demeanor giving clues about his hand.  Educated guesses about an opponent's cards can help you avoid mistakes in your own play, induce mistakes by your opponent(s), or influence them to take actions they would not normally make under the circumstances.  If you sense your opponent is strong then it's easier to fold.  If you feel they are on a flush draw then you can inflate the pot and make them pay for it.

For example;  a body language ‘ell’ might suggest your opponent has missed a draw and is weak.  If you also missed a draw and believe your hand is even weaker., you may decide to apply pressure by making a bet they can't possibly call.  In this case, using the tell to your advantage will prove effective and profitable. 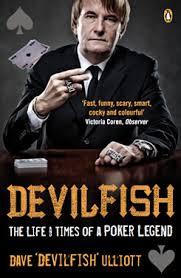 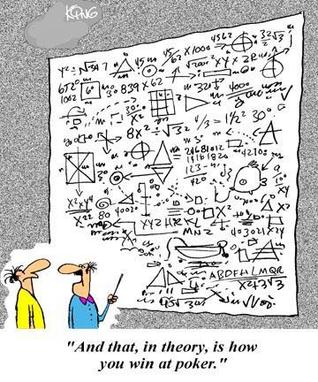 How 'Devilfish' Got his Nickname?

“I was playing against a guy in Birmingham and he said to me, ‘You should be called Devilfish’. When I asked him why he said it was a very poisonous fish that eats everything in the water. I responded and said 'I eat everything in the bath, except the soap.' I went to Vegas and people started calling me Devilfish, and it stuck.”

The Life & Times of a Poker Legend
'In the winter of 1999, on the sixth floor of a Cardiff hotel, I walked into a lift to find it already occupied by an elderly couple and a tall, sinister-looking fellow in a black leather trench coat and red sunglasses. "The Devilfish!" I breathed. "Can I hold your bracelet?" Without a word, the shady gentleman slipped a heavy gold bracelet off his wrist and jingled it into my hand. The elderly couple must have thought we were both insane.'
- Victoria Coren, The Observer Review

Reasons to Call or Raise?
"All-in!"
As soon as you've made the announcement, you realize you've made a huge mistake, one that will cost you your tournament life. You're opponent snap calls, beating you into the pot, and that's it. It's all over. Upon reflection you realize the right play was to just to call in that spot. It's a tough lesson to learn. Well, High Roller Radio has put together some tips to help you in those tough 'Call or Raise' situations.
Good luck at the tables.