'Kid Poker' Does it Again!​

It came right down to the wire, but Daniel Negreanu has been crowned the 2019 World Series of Poker 'Player of the Year' for a record third time.

Kid Poker Proves Once Again, He Can Play!

It really is an amazing accomplishment. With so many talented players grinding away on the daily and new stars emerging from the plethora of big money tournaments and cash games around the world these days, it's another yeoman's effort from the Canadian.

Negreanu is a six-time WSOP bracelet winner, one of the most recognizable faces in the game and, according to PokerDB/Hendon Mob database, he has accumulated $42,024,086 in lifetime poker earnings. Now, you add his third 'Player of the Year' award to the mix, nobody even has two, and you're talking about perhaps the greatest poker player all-time. His resume, that good. 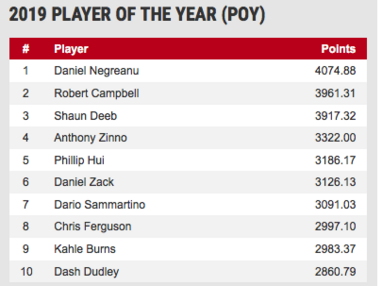 Before we talk more about Negreanu, I'd first like to say thanks to Joseph Falchetti, sports writer, analyst and editor-in-chief at Safest Betting Sites, for providing High Roller Radio some excellent insight on betting the 2019 World Series. And what a series it was! The Washington Nationals beat the Houston Astros in seven thrilling games, all of which were won by the road team. It was a great help Joseph and we really appreciate it. SBS, by the way, has a sister site, Safest Poker Sites, which reviews the best online poker sites. A fantastic resource for all players!

It came right down to he wire, the very last event of the WSOP Europe, and Shaun deeb needed a fifth place or better to over take Daniel Negreanu for top spot. He finished 11th. Heading into the WSOPE, Negreanu sat in third place and was hell bent on finding some success in Rozvadov, Czech Republic. As the world watched his daily vlog updates on youtube, it became evident quickly that he was going to play every event he could, in some cases with multiple rebuys, in order to achieve the feat. And he did.

Make no mistake, others were employing the same strategy. While the Player of the Year award does not come with any monetary reward it is certainly prestigious and highly coveted.

This marks the third time Negreanu has been crowned WSOP Player of the Year, previously winning the award in 2004, when he received a brand new truck for the feat, and then again in 2013. As for Deeb, he was trying to go back-to-back, after taking honour and all the accolades in 2018.

The World Series of Poker Player of the Year race uses all open bracelet events in the WSOP in Las Vegas and WSOP Europe. Two open events did not count, the $1,000 Tag Team No-Limit Hold’em tournament this summer and the WSOP Europe €250,000 Super High Roller. In all, 97 events were used toward Player of the Year calculations.

Congrats from the Poker Brat

Phil Hellmuth, who almost captured  his 16th career bracelet in Europe, finishing runner-up to Besim Hot in the €25,500 Mixed Games Championship for his 4th cash of the series, had climbed to 7th in the Player of the Year rankings at one point. He eventually dropped out of the top ten.

Daniel Negreanu is quite literally a master class in poker, that's the name of his instructional course, Master Class. Outspoken on social media and not afraid to express his views, is one of poker's household names. And, he continually backs it up with his fine play. It's hard to think of anyone better at this game.

The 2019 World Series of Poker is now over, in the books as they say, but the Player of the Year honour will live with Kid Poker forever. He earned it. He cashed in 24 different events, making five final tables, and is best result came in one of the high roller, marquis events, a second-place finish in the $100,000 High Roller in Las Vegas where he cashed for $1.1 million.

Always be safe when you gamble!