January 23, 2017
The reviews for Dark Side of the Felt have been great. Camille,  a reviewer on casinobooks.com who didn’t reveal her last name, wrote, “There is tension from page one, getting ever higher as the stakes at the table and in his life get ever higher. Excitement, drama, violence and humour are laced throughout the book to create a fantastic novel that keeps you turning the page over and over until you’ve finished the novel in one sitting.” That’s high praise indeed. 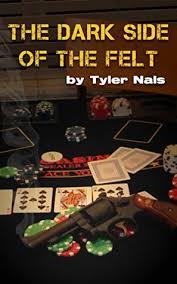 “You know those guys who play poker for millions of dollars on television? I’m not one of those guys. Instead, I risked my life on a nightly basis playing in underground poker games on Long Island and in Charlotte. This story is about how I managed to survive, but just barely.”
In just four sentences to his audience on goodreads.com, author Tyler Nals has outlined a life in poker, of playing the odds and of getting in and out of bad spots, both on and off the table. Nals has penned 10 books, including The Poker Office, Poker Notes, Felt Hopper and the very popular The Dark Side of the Felt, in which he delves into the mindset and character of an advantage player, the downside of gambling, addiction, and the depths someone will go to achieve ‘that' high.

Q: By all accounts, The Dark Side of the Felt, is receiving widespread acclaim for providing a glimpse into the seedy underworld of poker. It’s a harrowing ride into depravity and the thrills and spills that a turn of a card can bring. It’s a book of humour, gambling lingo and risky predicaments. Is this a true story, I get the sense it might be a fictional account drawing on your experience in card rooms and private games?

TN: You’re right on the money. The Dark Side of the Felt is a fictional story based on real experiences. Some aspects of the story are true, but I exaggerated greatly for entertainment purposes. I’m happy to see the story has had some success. My partner on the audio side—Adam Schulmerich—is very talented, which might help turn a decent story into a great listen. He also produced Poker Notes and The Perfect Range, and he’s currently working on The Poker Office.

Q: I understand you play cards under the radar, that know one really knows your true identity when you’re at the table. You see that more in other advantage play casino games like blackjack, when a pro is trying take the casino. Why have you employed that philosophy in poker?

TN: I used to walk into a poker room and think: Someone in here knows I’m Tyler Nals and hates my books. They think The Dark Side of the Felt is a terrible read and that my strategy books are pathetic. They think I think I'm better than them, but I'm just a regular guy. I honestly felt that if I walked into a room and people knew me, they would despise me. I still feel that way a little. However, for the most part, the Facebook poker community has been nothing but kind, and a lot of people keep telling me they like my books. I'm kind of shocked. Many people have also offered me accommodations if I travel to their area of the country to play poker. This Facebook experience has confirmed that the vast majority of people are good.

I don’t play under the radar for a strategic advantage. I only do it because I don’t want to field questions about my books when playing poker. I want to enjoy the game.

Q: Your books deals with poker lifetsyle and strategy, what strategy have you used in your writing?

TN: As far as my strategy books go, I’m not an expert poker player by any means. I don’t know advanced strategies, and I don’t pretend that I do. Furthermore, my math game is average. My strengths are money management, intuition, and a potentially unhealthy competitive nature. I firmly believe that profitable poker is simpler than people make it out to be, and that you're really playing against yourself, but everyone is different. I just do what works for me. I try to help beginner-intermediate players with easy-to-understand concepts for profitability. This market has been completely ignored. I was lucky to be in the right place at the right time, which filled a void. I never planned on writing poker books. I was writing a blog, and people really enjoyed it. An Internet entrepreneur told me to turn that blog into an eBook, so I did. It began selling on the first day. I have no idea how or why.

Q: What do you think about the popularity of poker these days? The evolution of the game, from the Sailor Roberts and Doyle Brunson days of back room gambling, private road games, to the advent of the WSOP and tournaments, then the Moneymaker win and now online poker. It’s been a remarkable growth.
What’s next for poker do you think?

TN: I wasn’t around for the beginning of poker, of course, but I have watched every WSOP Main Event (beginning with the original) and witnessed how the game changed. I think the growth of poker is great. It gives a lot of competitive people, introverts, and non-conformists an opportunity to place themselves in an environment in which they feel comfortable. The downside is that some people play above their heads and lose a lot of money. However, without poker that money would be gambled elsewhere anyway. My favorite part about today’s poker environment is the people. Poker players get a bad rap from the general public, but if they really understood and knew poker players, they would be surprised by how friendly and giving they are. As far as where the game is going, I don’t know. But I do think that uber-aggressive players will continue to steal the spotlight for a few years, then fade away, while the savvy players will quietly and methodically continue to build their bankrolls year after year.

Q: There’s so much emphasis of tournament players nowadays, they get the media spotlight, but the heart of poker is still the cash game. Can you get the money in when you have the best of it. Can you negotiate those edges. Can you describe the magic that is cash game poker? Say, a Friday night in an action game. There seems to be an art to it….

TN: I don’t differentiate my play too much between cash and tournament. Everything is situational. In cash games, I never re-buy, which minimizes my losses. Minimizing losses throughout a session is also a good way to increase profitability. Anyone can win a big pot with a monster, but not everyone can control their ego on marginal hands.

Q: For every tournament star, or guy that has a six figure score, how many players are out there losing their shirt? Chasing good money after bad? Getting beat by the game itself?

TN: I would estimate that only 10% of poker players are profitable, but this is based on limited research so I don’t know for sure. I have asked this question to dealers many times through the years. According to them, 10% for cash game players sounds about right, and it’s a little lower for tournament players. But if someone wins a tournament (or more than one tournament), it can be life-changing (for the better). Due to some off-the-felt/non-poker-related problems, I didn’t have a great 2016, so it feels kind of weird answering this question. My result for the year was embarrassing. I need to work on blocking out external events. This is one reason I don’t consider myself a pro, just a poker player who writes about his experiences. I started playing in bigger tournaments a few years ago and primarily at just one stop. I have several deep cashes and a win, but the win was small. It was nothing special, but I will admit that it still felt great. (btw, I don't play poker under the name Tyler Nals.)

Q: Any advice to players who have let gambling become a vice?

TN: I guess there are two ways to answer this question. One, find a good habit to replace a bad one. New habits usually take 30 days to form. Two, use it as motivation. To make up the loss, I’ll use freelance writing or write another book to recoup those losses. This wouldn’t apply to everyone, but there’s always a way to make extra money. You just have to figure it out. I document how I figured it out in Relentless Failure.

Q: What's next for Tyler Nals?

TN: My next two projects will be Felt Hopper: Vegas Strip and The Big Shove. In regards to the former, Felt Hopper: Florida hasn’t performed as well as my other books because I played like an uber-donkey and got crushed (rushed from one poker room to the next throughout the entire state). But die-hard fans still love it. I’m very thankful for those people! With the Vegas version, I will slow down. I try to get to know my readers. They can send a friend request to Tyler Nals on Facebook. I will accept. We have great poker conversations on there and almost everyone I associate with is friendly. We don’t take ourselves too seriously. We understand that this is a difficult game to beat for anyone, and that there's more to life than poker.