Stephen Hawking Plays Poker?
Stephen Hawking, author of A Brief History of Time, which sold more than 10 million copies worldwide, was invited to appear in an episode of his favourite teleision show Star Trek. In the episode, Hawking finds himself at a poker table and is called by an opponent who thinks he is bluffing. "Wrong again," Hawking proclaimed as he turned over quad 7's with a Jack kicker. Four of a kind? Fitting for the smartest man on the planet.

Ganjifa Anyone?
(Left) These Archaeology Ganjifa Playing Cards come from Iran. Ganjifa and Aas-Naas are traditional Iranian card games whose history goes back to the 15th century Safavid period. Apparently Ganjifa was similar to Hokm and Aas-Naas to Poker. These hand-painted playing cards are all from the late Qajar period and are made of lacquered papier-mâché.

The Ace of Clubs House?

Yes! This museum is a historical landmark in Texarkana, TX, (1885). A beautifully constructed, 22- sided house, built in the shape of a “Club” playing card. The local legend is that entrepreneur James H. Draughon built the house with the winnings from a poker game. The winning card was the Ace of Clubs. Each room represents a specific period in the history of the house. The house is located at 420 Pine Street and is part of The Texarkana Museums System. 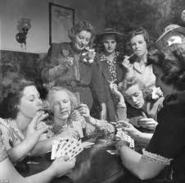 Playing like the Boys
In 1941, the Young Women’s Republican Club of Milford, CT, held a night like no other; they indulged in traditionally male pastimes like cigar smoking, poker playing and wrestling. The night confused the majority of Milford’s male population but made quite a splash none-the-less.

This image is from the photograph collection of the Bisbee Mining & Historical Museum: men playing cards at a saloon in Bisbee, Arizona during 1908. 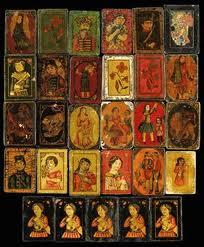 Dominic 'The Dominator" LoRiggio teamed up with Frank Scoblete, another professional craps shooter and author of several books on the subject, including Golden Touch Craps, to take hundreds of thousands of dollars from the casinos. While Scoblete is one of the world’s leading authorities on dice throwing, he admits it was LoRiggio who had the 'golden arm.' Think about this: the odds of rolling a seven are 1 in 6. LoRiggio once went on a 53 minute roll without crapping out, earning him $27,000 in the process.​

(Above) Frank Scoblete on Beating the Casinos 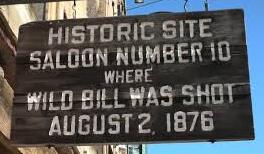 The Legend of 'Poker Alice'
'Poker Alice' Ivers Tubbs (1851-1930) was perhaps best known female poker player in the Old West. In her later years, Alice claimed to have won more than $250,000 at the gaming tables and never once cheated. In fact, one of her favorite sayings was:
"Praise the Lord and place your bets. I'll take your money with no regrets."

Biggest Gambler in the World?
Akio Kashiwagi, at one time, yes! In 1992, this Japanese property developer devoted a lot of time to baccarat and holds the world record for the biggest loss EVER playing that game - a whopping $10 million, in one session, at the Trump Casino. Soon afterwards, he was stabbed to death outside his home.

(Right) Saloon #10, in Deadwood, South Dakota is where Wild Bill Hickok took his last breath while playing poker in 1876.  You can still go and have a beer or sarsaparilla there while taking in the history and mining artifacts.

One Chip, Worth So Much?

Showboat Casino Chip Sets Record
Sandy Marbs of Florisant Missouri didn't know what she had when she listed it on eBay. The auction started at $2.25, not bad for a one dollar chip right? Well, not if its one of only two known surviving examples. A chip from the Showboat Casino in Las Vegas, which operated from 1954-2001. Turns out, that chip is valued at 15-grand! On eBay, it closed at a whopping $28,988,88.  Marbs had no idea she had such a treasure when she found it in her jewelry box, it had been there 47 years.  A newbie on eBay, only on the site for four months, she was looking for things to test on the site and when she came across the chip she said, "Why not?" Jackpot!  Marbs was inundated with emails after posing the listing, some offering to buy it immediately. With help from the Casino Chip & Gaming Token Collectors Club, she took better pictures of the chip and was absolutely delighted with the end result; a one dollar chip turns out to be a monster.

"I will only say it will be a great addition to my collection."

Greatest Trick Ever?
Antonio Esfandiari pocketed a whopping $18,346,673, and a WSOP bracelet, after claiming the $1 million Big One for One Drop, the largest buy-in tournament in poker history. Nearly fifty players, 48, ponied up the astounding entry fee at the 2012 World Series of Poker. 'The Magician' defeated Sam Trickett heads-up to claim the largest prize in sports history.

Quotable & Notable
"It's impossible to overstate the value of a World Series of Poker gold bracelet to anyone who takes the game seriously. It is the equivalent of winning the Stanley Cup in hockey or the Lombardi Trophy in football."

Walter Clyde Pearson
The 1973 World Champion of poker got his nickname ‘Puggy’ after a childhood accident left him with a disfigured nose.

A Putt for his Life?
Once, during a discussion about golf, Doyle Brunson said that if he had to pick one guy to make a 10-foot putt for his life it would be Puggy Pearson. Not Nicklaus, nor Palmer, nor Watson. Puggy Pearson! “He’s the greatest pressure putter I've ever seen,” Brunson said.​​ 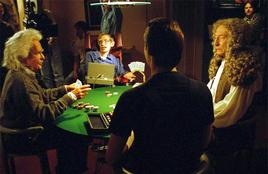 Strip Poker Anyone?
Carmen Electra hosted one of the best Sit N Show's ever, the Strip Poker Invitational! Six ladies vied to be crowned champion and pocket the $50,000 first place prize. 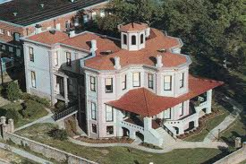