High Roller Radio has interviewed some of the greatest gamblers, casino insiders, sports bettors, authors and poker players. Here is our interview with Griffin Benger, 7th in the 2016 World Series of Poker main event, who talks about his wins on the EPT, PokerStars Shark Cage and the up and down lifetstyle of being a professional poker player.

I think he’s a really interesting guy because he’s so unforgiving about who he is and he's not going to put on a monkey suit, or even shave, for other people and that’s his prerogative. I definitely think poker can certainly breed bad habits, which I have definitely had over the course of my career at different points. You know, been unkempt, out of shape and depressed, but it can also be a gift. It just depends how you translate it. Before I came along to the GPL I had definitely become very jaded with the nature of poker and how feast or famine it can be. A lot of people outside of poker see it as a glamorous lifestyle where everybody’s a millionaire. It’s just not like that. A lot of people are broke. A lot of people are unhappy. It’s not necessarily the overwhelming majority but it certainly can be a very dark place. Now, with the GPL wehave 72 of the best poker players in the world, so that’s not necessarily the kind of player we have in this league. Going into this I didn’t feel great about tournament poker in general, what it was doing to people I knew and what it did to myself. To be able to come in to this as a fan of the game, to enjoy the true savants of the game and the characters, has been nice because I think poker, like success, can be a very deceptive thing. It can make you feel like a God one day and nothing the next. So, to come into the GPL as a fan of the game, to watch these guys in action, their thought processes, has been great.

Q: My perception is that you seem a bit jaded on poker and that the GPL has rejuvenated you. Would love to ask you about two of your career highlights, the high roller in Berlin and the $1 million score on Shark Cage?

GB: The fact I won a $1 million freeroll I’m sure some of you’re listeners are thinking, ‘Wow, what an ungrateful prick this guy is.’ I certainly hope I’m not giving off that perception. Obviously, a million dollars is the kind of money that changes peoples lives and maybe I should be praising the game until the end of time but it’s never really that simple. It wasn’t a great period in my life when I won the Shark Cage, for a bunch of different reasons on a personal level. It’s just never as simple as advertised. Winning that type of money, doesn’t matter whether it’s a freeroll or you’re backed, there’s always something behind the scenes where you’re never making as much as people think you are. It was a beautiful experience in the sense that I overcame some bad personal news from back home, pretty much five hours before I went on the show. So that was a personal triumph for me, which was also super rewarding. Berlin was much more special for me and the culmination of so much hard work, dedication and putting what I had learned to work. It was beautiful. I’m a huge movie narrative geek and the way everything happened in Berlin was just beautiful. Right before I left I had fallen in love with this beautiful girl back home who I went to school with. I went out there and she kind of became my muse over the course of this tournament, where she was like, ‘I love you, you’re doing great,’ and that inspired me. I had these ebb’s and flow’s, where I was just crushing on Day 1, running so good, finishing with an absurd amount of chips. On Day 2 this villain showed up, Martin Kabrhel, who’s this super high stakes, genius IQ guy, who was on my left and just beating up on me. You know, he was making me feel I wasn’t as good as I really was. One hand, he just destroyed me where he three-bet Aces and I just called him down on three streets and lost 80% of my stack, in a spot that I should never be calling. I felt like a fraud. Then, I ran it back up again. On the final table bubble, I won a big flip and I remember looking at the prize pool and thinking about how much I could win. My backer.was in for close to his entire net worth and this money would be so important to him. I was thinking, ‘If I win he gets there!’ And then on the final table it was me and Martin Kabrhell just battling. He had been bullying me but I had this moment where I just fought back. He had the alpha male thing where he would talk trash to you and make you feel bad. It was part of his ‘thing,’ his game flow, and then I shot back at him with a comment at the final table when I had gained some momentum. Then I knocked him out. Then I won the tournament. I had won $100,000 maybe one other time and I remember going back to the room with the $430,000 euro score and I was just so exhausted. Everybody thought I was gonna go out and party but my backer put on a suit, it was big moment for him, we had a couple of drinks and we just sat and talked about life and love. I called my girlfriend, who had never been out of the country before, and I said, ‘I’m flying you down here.’ It was just an amazing, beautiful story that happened to me in my life. When I got back to the room after dinner, it was about 2 or 3 in the morning, when everyone thought I’d be out partying, it was just me, this gold trophy and this beautiful Shamballa bracelet. I remember placing the bracelet down on the desk near the bed and I just burst out crying. I sat back on the bed and I was just balling my eyes out because it was such a culmination of hard work. I was doing something I loved, with passion, and I think that’s where the hard work should come from - passion. It was just a beautiful moment for me personally and you can tell I have more to say about Berlin than this freeroll on Shark Cage that brings up a lot of negative feelings. Sometimes you’re going to be a victim of your circumstances in life and I was a very sad person at the time. All of my happiness was derived from my poker success and, like i said, I had gotten some bad news from back home. I was wearing a mask. I was putting on a show. It’s an interesting insight if you want to go back and watch it. I’m getting high five’s from my rail and I seem as happy as a pig in shit but I was miserable.

GB: I would say fucking weird. Can I swear? The poker lifestyle is really, really weird and, to be honest with you, I’m happy to be disconnected from it now. I’m not as close now to some of the guys I was grinding with. I’m a very all or nothing person that way. When I was into it I was really into it, talking to these guys everyday, but it's super weird. There’s so many great people I’ve met in poker but the game can create a desensitization to money, not understanding the value of a dollar, and the kind of freedom it gives you is almost a double-edge sword. It can make you unbelievably lazy unless you have the right habits. You know, not everyone can be Martin Jacobsen or Olivier Bousquet. A lot of these guys, the Joe McKeehans of the world, all they do is try to make money at cards, to make a living and do whatever they want. I take nothing away from Joe McKeehan.

Q: Griffin, welcome to the show, thanks for being our High Roller today.

GB: (laughs) You’re very welcome. That intro reminds me of an inside joke. When I first started playing high roller events, all the players would be outside on break, Igor Kurgenov, Timothy Adams, Steve O’Dwyer, just talking about hands. I’d walk up and float in there, ‘Oh guys, this is a high roller conversation? Let’s talk high roller strategy. We’re such high rollers guys.’ So, it was funny how you opened for me because it’s been a running gag for me and some of my former player colleagues for a while now.

A WSOP first, a straight flush final hand to win a bracelet. Wow. 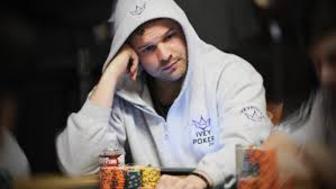 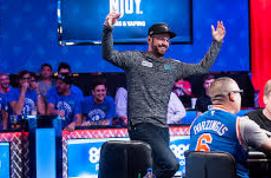 Q: From my vantage point, it seems like you’re living the dream? That’s what being a High Roller is all about?

Q: Before we talk more poker, I’m wondering if you watched that big fight last night between JC Alvarado and Olivier Bousquet, two of your fellow pros, who made that six-figure MMA prop bet?

GB: I watched every single second of it. I bet a couple hundred bucks with a friend of mine who I knew would take J.C. First of all, I’m a huge fan of Olivier Bousquet for a multitude of reasons. To say ‘I knew something’ sounds so absurd but he’s just someone who, when he dedicates himself to something, accomplishes his goals and is never going to be a huge underdog in anything he undertakes of that nature, whether it’s poker, lifestyle or just taking care of your body. I’m a huge fan of Olivier Bousquet and I’m very grateful to count him as a friend. Yes, I bet a couple hundred bucks on him and it was great.