JR: You have to come down to Las Vegas with the intention to party and drink another time, right now it’s all about playing poker. I’m just going to play poker, that’s the reason I’m here this summer.

Q: Do you think a lot of players get lost in that, they’re down in Las Vegas with all the distractions, and they lose their focus maybe hungover and not at their best?

JR: Oh definitely. In 2012, when I was here for the whole series, I was sidetracked and I didn’t do well at poker. So when I came down this time, I just focussed on poker.

Q: You final table the Little One for One Drop as well, came 4th for another 220k, and that was special because some of the money went to charity. Can you describe the difference between the two final tables, aside from the fact you won the first one?

JR: The second one, I was just very fortunate to be relaxed and ready to do whatever it took to win the tournament and the bracelet. The money, of course, is really nice but I really wanted to get a second bracelet in one summer because it’s such a rare feat to have something like that. I had that chance and it didn’t pan out but it’s still be a great summer. On that table, the bracelet was my sole focus.

Q: Were you more relaxed at the second final table because of the first one?

JR: Sure, yeah. I just had prior experience that summer so it was still fresh in mind what that experience was going to be like with the crowds and everything. I’ve done well playing online poker in the past but you don’t have the crowds right there watching you. The people, and lots of people, aren’t right there next to you. So, just having experience with the atmosphere ells you a lot.

Q: What’s it like having family and friends there to watch you when every turn the card could mean hundreds of thousands of dollars. I mean, you gotta have those hands hold right?

JR: Oh, of course, you’ve got to have your hands hold, especially when you’re all-in. If they don’t, it’s ‘try next time’ I guess.

Q: And not many people get to experience the rail of a WSOP final table. Special, right?

JR: Very special. I feel blessed actually to have friends who came to those final tables to watch because that definitely alleviated some of the stress for me too, to have people there to watch and cheer me on. It certainly helped. It does wonders.

Q: So what’s the plan now? You’re running good, playing well, is it just a case or more poker?

JR: My whole plan, even before I came down to the world series, was to go back to grad school for counselling psychology and I’m still going to do that. In the past, like 2010-2011, I used to travel a lot and play big buy-in events. I was fresh off of doing very well online and I thought I’d be able to do that but I got really burnt out. So, I had to figure out how to balance my life a little better. I feel this is the way to do it.

Q: Let’s talk about balance. You just went through almost two months of solid poker, you’re going bak to school now, do you think it’s important to have that education to fall back on should the cards turn bad?

JR: Honestly, maybe just anything. Anything that makes you feel more balanced in life is a good thing. For me? I was just very burnt out, travelling a lot to play big tournaments, and I actually had some relationships fall apart because of it. It’s a stressful life, the travel, and it puts a lot strain on relationships.

Q: It must affect your play too, especially if you’re running bad, your tired from all the trail, and a relationship’s in trouble?

JR: One of my friend’s came p with a great quote. ‘;You just gotta pay attention on every single hand, make the best decision possible every time and the results will come.’  One way or the other, if you know you’re making the best decision as you could be possibly be making, at that given time, it’s like, ‘Alright, at least I know I’m playing well.;’ So you just have to keep at it. It’ll be a grind and you’ll have to be resilient because there are a lot of downs in this game.

Q: You’ve had success in Omaha, both pot-limit and hi/lo. Do you think it’s important to dabble in the otter variants nowadays?

JR: I think there comes a time when hold’em just gets boring to a lot of people. It’s a great game and it will always be around but if that’s all you’re doing, especially if you play a lot of poker, you just get bored. For me I just found I needed something else because I was getting really sick of hold’em, especially ten-handed ring hold’em, the game was getting boring. If you play PLO or Stud it’s something different and you can challenge yourself to learn that game.

Q: Some of those other games have smaller fields, that might be advantageous in the bracelet hunt?

JR: Sure! There are just a lot of spots too where people don’t have those games figured out quite as well. They’re still going to be amazing players at the game but you can find some softer spots too. It’s also better to diversify your poker repertoire as well. If you can play a whole bunch of games you don’t have to wait for the best no-limit hold’em games to come along.

Q: How does a guy from hockey country, St. Paul, Minnesota, become a poker pro?

JR: I dabbled in a bunch f different things throughout my life. I played tennis in high school, soccer and baseball in elementary school, basketball middle school, and poker was something I just watched on TV. I saw a bunch of these kids make WPT final tables, WSOP final tables, and I was like, ‘Oh, this looks like a lot of fun.’ I just paid attention to it, tried to learn it, to see if I could become one of these guys.

Q: The WSOP is by far the biggest stage for any poker player. Do you feel validation now, as a poker player, that you’ve accomplished this feat?

JR: It feels good. I don’t really look for validation in how other people perceive me. I really don’t care. But, it feels good.

"There is always a sneer in Las Vegas. The mountains around it sneer. The desert sneers. And arrogant in the middle of its wide valley, dominating those diligent sprawling suburbs, the downtown city sneers like anything."
~Jan Morris

"The night before I left Las Vegas I walked out in the desert to look at the moon. There was a jeweled city on the horizon, spires rising in the night, but the jewels were diadems of electric and the spires were the neon of signs ten stories high."
~Norman Mailer

Slots o' Fun
Las Vegas has 1 slot machine for every 8 of its inhabitants.

The Age of Anka
When Paul Anka first played Vegas he was too young to be allowed in the casino.

She's Got Legs
Bugsy Siegel named his casino the Flamingo after the long legs of his showgirl girlfriend.

High Roller
Howard Hughes stayed at the Desert Inn for so long that he was asked to leave. He bought the hotel.

Did you know?
Camels were used as pack animals in Nevada as late as 1870.
* Average number of Vegas weddings per day, 315.
* Hours per day average visitor spends gambling, 3.9.
* Average gambling budget per trip, in dollars, 559.
* Number of conventions hosted annually, 3749. 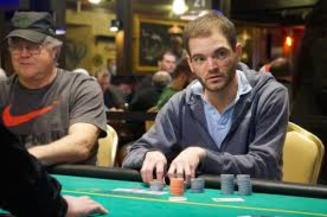 Q: Your first ever gold bracelet, must have been a great moment for you, and you secure a place in Las Vegas lore, winning the first ever Hyper Hold’em. Can you talk about that event, 20 minute blinds, so fast, how do you navigate a tournament like that?

JR: Early on, you just have to be creative, with that type of structure, you just have to say to yourself, ‘I’m gonna win this hand!’ Then you have to do everything in your power, check-raise or bluff, to win pot after pot because you can’t just sit around and wait for cards. Obviously, you have to get some cards. so i’s a combination of both.

Q: Can you describe the bracelet for us? And, do you have a special place for it? I mean, you’re part of that special club now, not many people win one of those things.

JR: Thank-you. I just put it up in my room. I’m not a flashy person by any means, so it just kind of sits in my room. 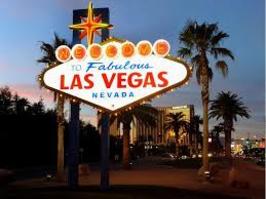 Q: Watching that final table, I got the sense you had the feeling the tournament was yours? I mean, it took you only 14 hours of play to win the bracelet, the heads-up match lasted only eight hands, it must have been so exciting?

JR: Yes, it’s always crazy when you have an experience like that. After the first hand, I think it was the Ace-King hand versus Ace-9, for the first guy who got knocked out, I just felt really relaxed. It was definitely special. 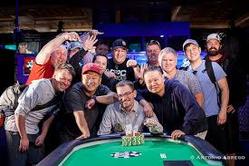 Q: Some players have those things under lock and key, framed, in a glass trophy case. You just have it up in the room?

JR: (Laughs) I don’t have it that secure but it’s not just sitting around. It’s got a place.

Q: You seem to be loving the grind? The WSOP is a feat to behold, a month-and-a-half of solid poker. You had seven cashes, two final tables and the bracelet. How do you keep up the pace? 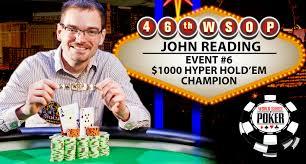 High Roller Radio has interviewed some of the greatest gamblers, casino insiders, sports bettors, authors and poker players in the world. Here, our Q&A with 2015 World Series of Poker bracelet winner John Reading, who had seven cashes, two final tables and a title in the $1,000 Hyper Hold'em event, what has to be the fastest anyone has captured a bracelet in poker's modern era, if not ever!