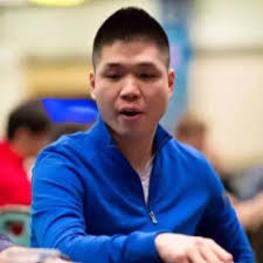 Q: By all accounts, ‘Libratus’ was getting better each day. Can you talk about the format and what you were noticing with this super computer over the two weeks?

DK: The BOT got better everyday. I mean, it really, really  just got better every single day. As the days went on, we were losing at a faster and faster rate. It was learning new moves and doing things that it hadn’t done before. There were a things the developers, Professor Sandholm and Noam Brown, told us. It wasn’t adjusting, or tailoring its play individually, so it was all just one BOT.  We knew it was adjusting but it wasn’t doing things we thought were weird, we were just basically seeing trends that weren’t there and being a little paranoid. Overall, it was incredible. I actually didn’t think it would adjust specifically to us as a team, seems like an exploitative thing to do. 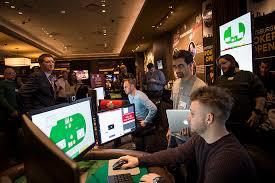 Q: I understand it had some specific pre-flop strategies and, on the river, employed some massive over bets, both as bluffs and for value, which threw you guys off a bit?

DK: Well, it actually has the over bets anywhere. How ‘Libratus’ works is it knows a certain number of bet sizes. I think it started with seven or eight in the beginning. Those bet sizes are all in relation to pot. I can’t be certain but I don’t think it knows ‘All-In’ but it knows quarter-pot, half-pot, three-fourths pot, pot, 1.5-pot, two-pot, three-pot, four-pot, seven-pot and I think there’s a 20x pot, which is basically all-in but it couldn’t do that on earlier streets. It only knows a percentage of the pot, that’s why it seems like there are a lot of all-in’s on the river because, by the river, the pot just keeps getting bigger and bigger. It definitely just goes all-in somewhere. For instance, there were  couple of times where I raised and ‘Libratus' called. The board is 10, 9, 5, ‘Libratus’ checks, I bet three-quarters pot, and it goes all-in for just under 20k. So, it does that. In my opinion, there should be no hands that ever play like that but we got a beat down, so it’s hard to say.

Q: Do you already incorporate these large over bets into your game or did the machine teach you something, like, ‘Hey, I can do this kind of thing more in my game?'

DK: Both. About halfway through the challenge it was pretty depressing, it seemed like we weren’t going to win, we were still trying but we were losing. One thing we were all flattered by? About three or four years ago, we started applying ‘Game Tree’ and what ‘Libratus’ is doing, in the grand scheme of things, is what we started to apply back then. We played poker in a very two dimensional way, where we always played aggressive preflop, we always c-bet the flop, and we really didn’t know what would happen if we checked or how I range really changed. We really didm’;t think about the ‘Game Tree,’ we just didn’t know about it. So, we were really flattered to think, ‘Hey, this BOT is basically doing what we’ve been striving to do.’ In fact, sometimes, at the end of the day for example, we were able to see the hands that ‘Libratus’ played, we were able to see the mirror, and it was really flattering when we played the hands  the exact same way ‘Libratus’ played them. We were striving to play like ‘Libratus’ but the machine just executes so much better, more precisely, and it’s something people wouldn’t be able to emulate. I’ve been pretty busy for the past few days and I haven’t had a chance to look at the sample but I am really excited to figure out what was really going on.  We didm’;t have as much time to look at the meta data but I’m really looking forward to that.

Q: That information is crucial right? You’ll take that, study it, and use it to exploit future opponents?

DK: Yes, that sounds about right. There are some concepts I know I just can’t apply to my game. ‘Libratus’ has a mixed strategy, so it likes to do a little bit of everything, everywhere. It likes to do things a certain percentage of the time. One, there might be a problem with the sample size, and two, it would be extremely tedious. It would mean I’d have to be in front of the computer clicking the randomizer, knowing exactly what to do with every hand. For example, once I four-bet 9, 10 off six per cent of the time, on the flop I’d have to know how I’ve played these hands depending on the board. It’s just too complex. It;s cool but just too complex. I’m just gonna steal the basic stuff, the things I can emulate.

Q: Did you underestimate this machine? And, what do you think of the team at Carnegie Mellon University?

DK: Did I underestimate them? Normally, I’m not one to throw my friends under the bus but I didn’t underestimate CMU.
They’re not good poker players obviously but, after meeting them last year, they’re geniuses and hopefully they’re going to be the ones saving the world. After they got the stomp down on ‘Claudico,’ last year, I just didn’t seem them coming back without a much stronger BOT. At the vey least, I knew it wasn’t going to be beat down for them. It was very difficult for them to tell what would happen because they didn’t know how strong their BOT was or how it would fare and they had no reason to believe we wouldn’t find a hole in its game this time. I didn't underestimate them but, to be honest, after the first few days I still thought we had an edge.

Q: This whole business of artificial intelligence, it’s kind of scary isn’t it? To think that scientists can develop a machine, a computer program, that can beat humans?

DK: I am more of an optimist with that. I believe that AI will make the world a better place.For example, human error is the cause of so many terrible things. Sure, sometimes the computer can glitch and m,orality is kind of on the line but I for one welcome our new robot overlords.

Q: This story’s been picked up all over the world right?

DK: Yes, I’ve been getting a lot of attention for this story. I feel like I’m not even remembered for any stuff I’ve done before.

Q: I have to defend the humans a little bit. You guys played 120,000 hands, long hours, further study after the sessions ended, it wash;’t exactly your ideal scenario?

DK: That’s true, but I’ll try to give an unbiased answer as to how I think we would have fared. The disadvantages? Originally we wanted to start at 11 a.m., finish at 7 p.m., with an hour dinner break. What ended up happening? We started at 11 and didn’t finish until about 10 or 11. We eventually ditched our dinner break because it was just taking too long, we’d rather just get out earlier. After, we’d grab some food really quick and go over our stuff. The moral was pretty bad. We got a beat down, we were tired, and after looking at the hands saw that were bluffed in spots. It was just tiring and it wasn’t the most optimal situation. But, for the record, I think if we played in the most optimal situation, with all of our software in front of us, in game, real time, we still would have lost. Even if we had our tracker, which is very important by the way, likely more important than actually seeing the hole cards, especially when it comes to a BOT that adjusts. We’d develop a strategy the night before, apply it the next day in game, and we didm;’t realize it wasn’t working. For example,w e found the machine folded a lot in certain spots and we were just pounding away at it, thinking we were making tons of money, but in fact we were into the depths of everything terrible. Having a HUD would be very good. I think that would make things closer but I still believe we would have lost by at least the one chip mark.

DK: The only time we were really depressed and deflated was about mid-way, three-quarters, through. At the end, it’s more of an acceptance thing. Now, we’re really impressed. ‘Libratus,’ it’s algorithms, were utterly brilliant. I don’t know how this is going to be applied to the real world but everything about it was impressive. The whole experience was great.

Q: Before we talk about ‘Libratus,’ can you run down your team for us? You have Jason Les, Daniel McAuley and Jimmy Chou, all of whom are top notch poker players, some of the best in the world. Do you guys play similar or did each of you bring certain talents and specialties to this match?

DK: Actually, we play as similar as it gets because we’re all friends. Going down the line; Daniel, I’ve know that guy for maybe nine years, Jason, he’s been my roommate in Vancouver for the past few years, and Jimmy Chou, he used to be my roommate in Hong Kong and Las Vegas, for about five or six years, so we all go way back. We all started at the bottom together, played heads-up and moved up the stakes. As far as us versus the general player pool? I think everyone who’;s played us, or knows the community, knows that we play very similar. I know these guys very well, we all have our opinions, and we definitely share the same concepts on a lot of major topics, but I know the differences between us. I know how Jason and I may differ, or Jimmy and myself. I know which one of us may be a little more spewy and which one of us is a little more cautious. So, I know the differences in styles but, in the grand scheme of things, we are as similar as it gets. 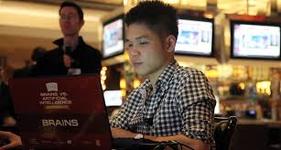 High Roller Radio has interviewed some of the greatest gamblers, casino insiders, sports bettors, authors and poker players in the world. Here, our Q&A with high stakes poker pro Dong Kim, who was part of 'Team Human' in the rematch with Carnegie Mellon University's super bot. Kim discusses the 'Brains v Artificial Intelligence' challenge and the machine they call 'Libratus!'

"I welcome our new robot overlords!"

Q: It’s been a monumental few weeks for Artificial Intelligence, your team got crushed by ‘Libratus,’ this highly advanced poker playing computer, in the Brains v AI challenge. Safe to say you guys were more impressed than deflated?​