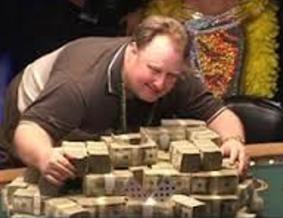 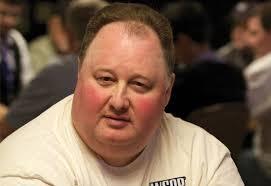 Q: In 2004, when you won the world championship, it seemed to me you hesitated before raising your arms in victory?

GR: Well, it took me a moment to realize I had won the pot and then I knew immediately that I was winner of the tournament and the world champion. It was how the hand played out. Effectively, I was sitting in the 4 seat, so when you think of the poker table, the oval, the dealer’s in the middle, and if I’m facing the dealer my seat is in the middle but I’m off to the right a little. David (Williams) was at the end of the table, in the 7 Seat, give or take. So he’s facing the middle of the table about 90 degrees from the dealer. 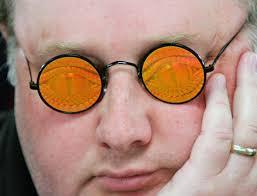 Matt Savage was the tournament director that year and he’s standing over the dealer’s shoulder. So, when the river card was dealt and I decided to go all-in, I looked at Matt Savage to verbalize it to him because if he hears me clearly I’m not going to get a bad ruling. You know, it’s not going to be like I say it too quietly, nobody hears me, and they would think I checked so he'd check behind. I don’t want to say it to David, I don’t want to say it to the dealer, of course they need to know, but if Matt Savage hears me clearly he’s the tournament director and nothing can go wrong, by accident so to speak. So I look up at him, which means I’ve pointed my face away from David, and I say, 'I’m all-in.’ Before I could turn my head 90 degrees to look at David, he's already said, ‘I call and turned his hand up. The board is 2, 4, 5 rainbow, and then another deuce and a third deuce, and he’s called so quick my first thought is my pocket 8’s can’t be any good.

Q: When someone snap calls you like that, they’ve usually got the goods.

GR: He's either got the deuce, or he's got pocket Aces or whatever. So he snap calls and my first thought is that’s not a good sign, I must have lost and now, instead of being a 2-to-1 chip leader, I’m doing to be a 2-to-1 underdog. He’s tabled his hand now, he had A4, so he paired the four that was on the board. He had deuces full of fours, so I did have the winning hand but I had to look back and forth a couple times, at the board and his cards, and I had pocket 8’s. I had to think about it for a second or two before I was emotionally sure that I had won. I was okay ‘Yes,’ my initial reaction that he snap called and I must be a loser was wrong and I did have the best hand. So yes, it was a delayed reaction.

Q: So your arms are up in the air, you make that primal scream, what was going through your head at that moment? I mean, you’re the world champion?

GR: To be honest, I really compare to anytime you have a victory in anything, whether it be beating your buddy in a game of chess or little league baseball, it’s the same kind of feeling. It’s just amplified because of the scenario. If you’re a gymnast and you win the high school meet against another school it’s good and you feel great. If you win the Olympic gold medal it’s the same kind of feeling but a hundred times or a thousand times stronger because it’s so much more significant in importance. It’s not that the feeling is different, it’s just more.

GR: It’s funny because people always talk about it, you can sit there and listen and think, ‘Oh, come on,’ but at the time you’re not really thinking about the money. That’s true. I mean, I was thinking about the money only in the sense of pay jumps, they’re ‘this much,’ do I think my opponents are going to react to that and does that mean I can bully someone around. It’s not a question of, ‘Holy shit! This is more money than I’ve made in my entire life.’ Even the jumps were huge. The jump between 2nd and first was more money than I’ve ever made in my life by far.

Q: Always wondered if you were nervous? I mean, you’re playing under the lights and ESPN cameras to a worldwide audience, and so much money up for grabs, I think I would be. How do you stay calm when you’re playing for life altering money?

GR: I’m not sure. I’m never been the type of person to get nervous or to worry about stuff. I used to do stand-up comedy and the first first time I ever went to perform, an open-mic night in Minnesapolis when I was in graduate school, the University of Minnesota, when I stepped on stage I felt nervous but it only lasted a few seconds. Then it was like, ‘Whatever, if I bomb I bomb.’ The nervousness was barely there. Now I get invited to celebrity charity golf tournaments and you’ve got fans coming up looking for autographs all day. They watch us play golf too. So you might be teeing off and have dozens, even hundreds, of people watching and I might hit a bad shot but that’s just because I’m not a very good golfer. In other words, I’m not doing worse because the crowd is watching.

Q: It seems to me that handling the fame and spotlight comes naturally to you. Was that an easy adjustment?

GR: Yes, it was easy for me. I know for some of the other champions, or guys who have won really big tournaments, since the poker boom in 2003 it has not been an easy adjustment. They’re not comfortable with the attention. They’re not comfortable, even after years it, when fans come up to ask for photos or autographs or just to talk to them. The fans will try to ask them about a hand or something and they’re just not comfortable in that situation and doing that stuff. I think it might be in the genetics. It’s not like I’m better because I handle it naturally, that just happens to be my disposition.

Q: Some past main event champions have made an effort to avoid the spotlight, whereas you have embraced it and toured the world as a poker ambassador.

GR: It’s just a matter of personal preferences. Joe Cada is a great poker player, loves poker and plays a lot but he would rather just be the Joe Cada before he won the main event. He’s thrilled to have the money, the opportunities, he can travel more and play in bigger events, bigger cash games, because he has a bigger bankroll than before, but I think he would prefer it if he didn’t get all the attention. It’s an interesting thing. I’ve heard people talk about fame in general and what they’ll say is that fame, in and of itself, is not a  good thing. It’s only a good thing to the extent you can monetize it. In that sense, it doesn't bother me and I’m perfectly happy talking with fans because they always want to talk poker. If, for some reason, all these fans came up and wanted to talk about basketball? I mean, I don't follow the game and we couldn’t have that conversation. I wouldn’t be interested in those conversations, but since they always want to talk poker, and I love poker and playing poker, it’s a perfectly enjoyable and fun situation. For me, no big deal, I enjoy it. I’m doing some poker teaching now and I love doing that. Even when I was a kid I liked helping my fellow students. When we were done with math class and someone came up to me saying they didn’t understand calculus that day I was more than happy to try and explain it to them. I think I’m really good at that.

Q: Is there a fraternity of past champions? Something the fans may not be aware of?

GR: Not really. I used to represent PokerStars and for a while there it was me, Chris moneymaker and Joe Hachem. You know, it was the past three world champions and the advertising at PokerStars was built around that fact. They would send us off on media tours together so I got to know both those guys pretty well. They’re great friends, great family guys and wonderful guys in general. Joe Cada? I know him a bit, I like him, he’s an intelligent young guy, but I don’t see him that often. I can’t say I know him that well. There is certainly no gathering of champions. It’s not like we all get together and have a super dinner during the World Series of Poker. Given this common thing, that we have won the tournament and the world championship of poker, you tend to get to know one another. I would hang out with Chris Moneymaker and Joe Hachem all the time but they live in completely different places and we’re very seldom in the same place. When we are it’s the WSOP and we’re all busy cause we’re playing in Day 1’s and Day 2’s and occasionally we get to Day 3’s and final tables. Our schedules are pretty full with the tournaments and cash games and we just don’t get a chance to hang out like we would enjoy. Certainly, if I lived in Vegas and Joe Hachem lived in Vegas we’d be getting together all the time. Our families would be getting together all the time. The same thing for Chris Moneymaker and many other world champions.

Q: What about Mike Matusow? You guys had run-ins at the ’04 world series but you’re friends right?

GR: Almost everyone likes Mike. I like Mike. His behaviour was less than perfect during that tournament in ’04 but, if you read his book, I don’t think he had been diagnosed yet with his bipolar disorder. He was taking some medications but they weren’t necessarily at that good spot yet where they were doing their job well. So a lot of it was those mental disorders acting up because they weren’t under control yet. His natural personality is to be that acerbic guy but it’s all well intended. It’s kind of like when I was in a fraternity you were always ribbing each other but you were frat brothers and you’d live or die for them. But, you’re also gonna try and tear him apart verbally when you’re just making fun of him.

Q: Mike Matusow definitely wears his heart on his sleeve.

GR: Yep. If Mike was an acquaintance, and several other guys were better buddies, it still might be that if you needed some significant favour he’d be the guy more likely to step up and help you out. He is extremely loyal to his friends, has a heart of gold, and he’ll still rip you apart, make fun of you and call you names. That’s just part of the game, it’s not an indication that he looks down on you or doesn’t like you. So you have to understand it in that context or you’re not going to get along with him. If you were to ask about all the well known different players, those who have been on television, he’s one of the more well liked and yet the public might think he’s one of the less liked amongst that group because of the comments and the insults.