Who is the 'TOP DOG' in Darts Right Now?

Gary Anderson has had a s sensational 2018; UK Open winner, World Mathcplay winner, Champions League winner. Is he the man to beat in darts right now? Or is it Michael van Gerwen? 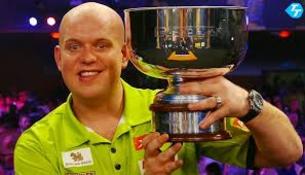 Who is Dart's Best Player at the Moment?

In the mean streets of professional darts it’s dog eat dog! And, after Gary Anderson’s remarkable rush in 2018, people are wondering, 'who is the top dog right now?' The bookmakers have their answer, Michael van Gerwen the favourite in every event he plays,but how about those on twitter? How about commentator Chris Mason? They say "NO!" The best dart player, right now, today on High Roller Radio.

When Gary Anderson beat Mensur Suljovic in their Champions League semi-final, handing the austrian his first ever loss in the event, a resigned Mensur admitted afterward, “I lost to the best player. Gary’s a better Player!” Then, later, after taking down Peter Wright in the final, Snakebite, as runner-up, essentially echoed those remarks. “I lost to the best player,” he said. ”He’s the man to beat!”

"Anderson had 3 10-darters in 11 legs,” reported @Ochepedia, "one of which won him the tournament. Magnificent!"

"For a bit of perspective,” read his next tweet, "in professional darts, you would normally expect to see a 10-darter once every 500 legs. For a player to do 3/11 (and in a TV final!) is unheard of!."

This really has been the year of the 'Flying Scotsman.' Hard to argue these facts; UK OPEN WINNER. WORLD SERIES WINNER. WORLD MATCHPLAY WINNER. CHAMPIONS LEAGUE WINNER. Darts Behind the Oche called it “Simply Sensational.”

“Wow, thanks for all your messages,” Anderson said on twitter after Sunday’s final. "Really happy to get another title under my belt. Home time tomorrow to give wee man another trophy!”

“You beautiful man,” replied @TheSportsman.  "You're an absolute joy to watch,” said Josh Brandford. "Keep it up please. I've just stuck a tenner on you for the worlds!” Brendan Dent’s thoughts here, "I think you’ll be favourite for every tournament you play now.” Fellow pro and Scotsman Cameron Menzies sent his love (hearts and kisses emoji's) for being crowned the Champ of Champs. Another fellow pro Jamie Caven said, "Well done champ," adding both the the 'thumbs-up' and 'trophy' emojis"

"Have you ever hit three 10 darters in one match before?” Bryan McGInley suggesting, "I don't remember seeing that?"

Then we got this from former pro and current commentator, the Itv's Chris Mason:

"Gary Anderson best player in world darts right now.” A clear & concise statement and one that generated some buzz:

"He’s had some year so far,” said Dermot Snooker,who’s got him pegged as the favourite for Ally Pally this year. Darts Retweets agreed, "Heading for a 3rd world title i think. When previously asked, how many world championships he’s going win? I have always thought three!”

Not everyone agrees though. "Have a day off,” said Mcihael Mangan. "it's still clearly MVG!”

"MVG WORLD NUMBER 1!” All bold letters from Matthew Thompson. But most of the comments supported Mason’s claim, like this one from Jason Damario:
"Best player and what a down to earth fellla. Great role model!"

"Difficult to argue with that.” Malcolm concurring. "What a player." Keith D adding, "That 140 check out v MVG, jeeezus!

”
"Mental how important that checkout ended up being,” said Chris Gunn. Yes, what a shot that was. Tied at nine in their final round robin match, Anderson needing a win to stay alive, after van Gerwen missed two match darts, Anderson threw, what he later called, “the three best darts” he’s ever thrown. Took out 140 for the match. You talk about clutch, that was it! Survived & advanced in spectacular fashion and went on to win the tournament.

Is that shot alone, why he’s the best player at the moment? The fact he had the stones to pull it off under that pressure? Certainly evidence anyway! All MvG could was smile. Mason, a top quality dart player is his own right, then, re-emphasized his social media claim on Darts Planet TV. "The Fact of the matter is,” he said, "right now, Gary Anderson is best dart player in the world!”

On Michael van Gerwen? ”He is the world #1,” Mason admitted. “He’s dominated the Euro Tours, which is a short format, he’s been able to Bully them over a short course.” He noted that MvG has just the one televised title this calendar year, the Premier League, and that “Anderson’s won on every channel, including the radio!”

Is he the Best ever?

“You’d certainly have him in your top five,” Mason said. But for him, "Phil taylor is the best player to ever tickle tungsten.”

The PDC’s Chris Murphy used the topic for the basis of his #DailyDartsPoll, asking, "who is the best player in the world at the moment?" Of the 512 votes, an overwhelming 76% said Ando, while just 21% MvG.

The Weekly Dartscast got similar numbers with 74% backing Anderson and just 26% van Gerwen. There were 233 otes in that survey. Joe Williams' poll had 83 responses, 65% said Anderson is the best arrow smith currently, only 35% believe its the Dutchman. @ochebalboa1 posted his 'Top 5' and had Anderson #1 MvG #2.

As for most major titles? Burton DeWitt gave us the rundown;  Phil Taylor toppping the charts with  81, van Gerwen’s next with 29. Eric Bristow won 24 , the man of his era. Raymond van Barneveld has 21, Trina Gulliver 18, then Anderson with 12 and John Lowe with 10.

@ProGambler47 minced no words,"MVG is the most over-rated and underpriced player in Majors in the history of the sport.” Win With Tony Ansell suggesting "Massive profit overall in laying him. World Championship record very poor and there to be taken on every time now. Only idiots would take 5/4 for the PDC World Champs. He should be over 5/2!”

What does Mighty Mike think of all this?
"Of course it hurts to go home without the trophy,” the world #1 tweeted, "but Peter and Gary deserved to be in the final." Congratulations Gary.  Bad day for me, too many mistakes. I will put it right & get ready for the Grand Prix.”

So who would you stick a tenner on for the Ally Pally? They’ve both won it twice before, Michael van Gerwen in 2014 & 2017, Gary Anderson sandwiching his back to back championships in between. Chris mason, darts fans on twitter, they got right to the point - Gary’s the best player!