Past the half century mark, and still gaming strong. Al, AKA "nuTTT" or "nuTTTz", is avid poker player and gamer with a strong background in all things technical, an ear to all things spiritual, a drive to improve every day and a sharp wit. You just never know what he might say next. Al is a well-known Twitch Poker moderator and a regular contibutor to High Roller Radio.

“I’d rather live one day as a lion than my whole life as a lamb.”

“Limit poker is a science, but no-limit is an art. In limit, you are shooting at a target. In no-limit, the target comes alive and shoots back at you.” 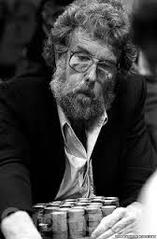 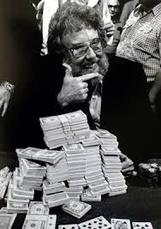 A Chip and a Chair- Jack 'Treetop' Strauss, A Gamblers Story
By: Al McDonald

August 1988, at 58 years old Jack Strauss, while playing high stakes poker at the Bicycle Casino, transitioned from this life unto the highest stakes, leaving a legacy to poker that will be remembered for all time.

At six feet six inches tall you could easily imagine a large imposing presence, even sitting at the tables. Yet he was known more for his love of the sport,  as a man's man, his incredibly sharp wit, as well as a couple of the greatest moments in poker history.

​
While a lesser known story than "chip and a chair", the bluff is every bit an incredible tale. This story was told in the biopic 'Stuey', but unfortunatly credited to another player.

Besides Strauss, only five other players (Doyle Brunson, Stu Ungar, Johnny Moss, Dan Harrington & Johnny Chan) have reached three or more main event final tables. Strauss died of an aortic aneurysm on August 17, 1988 at the age of 58 while playing in a high-stakes poker game at the Bicycle Casino in Los Angeles. He was posthumously inducted into the Poker Hall of Fame later that year.​

The term is known by all poker players 'a chip and a chair', it is the mantra for any player low on chips but determined still to win. The story behind it is short and easy to tell, so let's get to it.

Day 2 of the 1982 WSOP saw Jack in a big pot that would set the stage.  Without verbally declaring 'all in', Jack pushed all of his chips into the middle and lost the hand. While getting up from the table he noticed a $500 chip tucked under a napkin he had not seen. Sitting back down with his single chip Jack found himself getting a great run of cards to survive the day. At some point it is told that he said "As long as I have a chip and a chair, I'm still alive in this event.". A comment that may have gone fully unnoticed, had Jack not gone on to win and become WSOP champion for 1982.

The stories they leave behind are how legends are remembered, Jack 'Treetop' Strauss will always be fondly known as just that, a legend.​

While sitting at a high stakes No Limit Hold'em table, Jack was having a great night and had won several large pots in a row. As any player can easily imagine, when running really good you feel like you can win every pot. Jack decided to himself to play the next hand like a big hand regardless of what it was. Looking down to see 72 did not sway the big man, he raised preflop. One brave soul found a hand and elected to see three and called. The flop brought a good board for Jack's hand, 7 3 3.  Continuing the plan, Jack bet the flop, but his opponent quickly raised the bet. Jack called the large raise and the turn brought a 2.  At this point Jack made a very large bet. His opponent now was confused and was taking some time to think, when Jack offered him a deal, 'for $25 you can see one of my cards, either one your choice'. The chip was tossed over and Jack turned over a 2. Thinking that Jack must have a pair of 2's in hand he folded the hand. At which point Jack turned over the 7, and history was made. Known still to this day as the 'greatest bluff in poker history'. 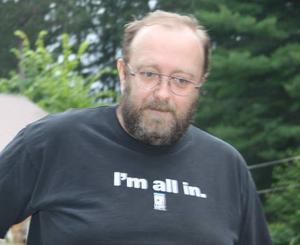