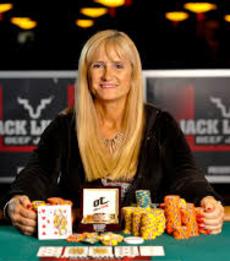 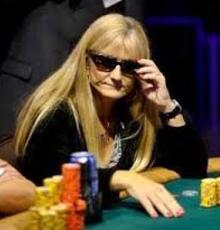 High Roller Radio has interviewed some of the greatest gamblers, casino insiders, sports bettors, authors and poker players. Here, our interview with Marsha Wolak, WSOP Ladies World Champion and director at Epic Poker Training, who talks about her amazing victory, the year a man made the final table.

Q: With so many people, from all over the world, the first time for anyone can be intimidating, right?

MW: It’s a tough word, 'intimidated,' because if you’re intimidated it limits you and the things you can do. So after being intimidated that first year, I came in the next year with a different attitude and said to myself, ‘I’m just going to focus on my table.’ I wasn't going to worry about the thousands of players. I just tried to focus on the players at my table, block the rest out, and it really helped.

Q: These large fields at the WSOP are still dominated by men. I think, on average, about 4% pr 5% of the pool is made up of women. How do we attract more women to the game?

MW: I’m glad you bring this up because I’m constantly trying to get more women in the game. I understand we have physical differences. You have testosterone, we have estrogen. When you look at the fields it's a fact, like you said maybe four or five per cent of the tournament are women, and so there’s a reason for that. A lot of times it’s physiological. We’re built different. We’re emotionally different and it’s intimidating. That’s why I love ladies events because I was so intimidated that I only played online for first couple of years. I was too intimidated to walk into a poker room and, if you know me, I’m not afraid of anything. For me to be intimidated like that there’s a problem there. The ladies events are a platform, a stepping stone, for women into the open events. That’s why I played my first tournament. When I heard there was a ladies event in St. Petersburg, at Derby Lane, I went and I played so bad. I was nervous, didn’t know what I was doing, and I bet out of turn so many times I was actually defaulted. I mean they just couldn’t take it anymore, I was so bad. I realized then that I wanted to work on my game. I was so impressed with Annie Duke, and her teaching skills, I thought it would be great to be able to give back like she’s doing and be half the instructor she is. So, the minute I won, the next day, I was coaching and helping others and trying to bring more women into the game. I help men too. I just love the game of poker. For me, this is kind of a neutral gender sport, you’re using your brain, but there really is that physiological difference that we have, which is why there is only four to five per cent of women in poker.

Q: Which brings us to the 2011 WSOP Ladies World Championship. What a wild tourney that was?

MW: It happens in ladies tournaments and, the tournament that I won, a man made the final table. It was the first time in history. We all heard was the buzz, ‘Oh my gosh, there’s a chance a man could win.’ The spectators started out just hanging around, then they were two deep, three deep, four deep, because it occurred to all of us, with him at the final table, that a man could really win this thing. We were like, ‘You know what? If he wins this thing it’s going to be really bad for women’s poker. There’s enough intimidation already. I suffered the year before. You know the story, I actually lost to a man wearing a dress, high heels and lipstick. I thought to myself the next year I wasn’t going to play because it’s hard enough for women to come out, feel comfortable and play these big venue events. Here we have a women’s event, it’s supposed to be more social and fun, but to have that going on just isn’t right. I wasn't even going to play in 2011 but I’m a very positive person, I like to overcome adversity, I’ve overcome a lot in my life, and at the last minute I changed my mind. I thought, ‘How bad could it be Marsha? You lost to a man dressed up as a woman, with pocket aces all-in preflop. No matter what happens this year it can’t be a worse than that experience.’ I just couldn’t play my last ladies event with that experience. I entered on the last flight, last day, and I ended up winning it. It was great. Not only did I win it but I felt like I had won it when I knocked Jonathan Epstein out of the final table. When I knocked him out, it didn’t matter to me if I actually went on to win the trophy and the bracelet because I really felt I had already won, right there. It kind of brought the last year home as well.

Q: Shaun Deeb, a well-known poker pro, one of the best around, busted you in 2010. How did that go down? Was he good about it?

MW: I like t stand up for my beliefs, my principles, not only in the poker world but in my life and for my kids. Men enter because they feel the women’s field is so soft, or whatever, but you know there are a lot of great women players out there. For them to dress up in high heels and wear lipstick, they’re making fun of us. And, it’s no excuse to say, ‘Oh, it’s a prop bet,’ or ‘Somebody bought me in.’ That’s really a lame excuse. This year for instance, even though the buy-in is now $10,000 for men, there was one individual who played the ladies event. I’m embarrassed to say he is from south Florida. His name is Tony Roberto. It just brings homes the fact there are people who disrespect women, there are people who disrespect men, people who disrespect the elderly, or veterans. I respect them all and just wish people would respect me in return. Obviously, there are people out there who don’t have a clue. I always default to my morals, my principles, my values, and I just don’t understand that.

Q: I can only imagine what was going through Jonathan Epstein’s mind when he got knocked out. What about the women at the table? You must have been thinking, 'we have to get this guy outta here?'

MW: Absolutely and we didn’t need to say anything. It was instinct, subconscious, we didn’t need to say anything because each of us wanted to knocked him out. I just remember people in hands against him. The disappointment when you’d lose a hand, and the chips would go to him, was unbearable. I saw it. I even had said, ‘Marsha, two things; I want to knock him out and I certainly don’t want to be knocked out by him.’ I always believe I can win but my number one goal was to knock him out. It almost kind of overshadowed winning the tournament because we knew the importance of it right at that moment. The spectators were multi people deep, watching this, thinking that he could possibly win the tournament and he could. He made the final table. That would have been such a shame for women’s poker. It would have discouraged so many women from entering. I’m not a materialistic person, I mean I always want to do well, I want to win, but I am driven by my morals and principles. I’m driven by a lot of things other than just money and gold bracelets. They’re fantastic but I have two children, I have hobbies, and I have a lot of great friends. So I saw the magnitude of that moment and I was one of the final tablists who could knock him out. I remember it to this day. I didn’t breathe the entire hand. I’m glad I’m a good swimmer. My son and I, he's a good swimmer as well, used to have competitions to see who could hold their breath the longest. I held my breathe that entire hand. I had pocket tens and barely had him covered, so whoever lost that hand was basically done for the tournament. I was on the button, shoved my stack and he called out of the blind with ace-queen. My tens held. That was the best race I’ve ever won in my life, maybe the best race I’ll ever win, and it meant a lot to me. The celebration after that hand might have been bigger than the celebration when I won the tournament. I believe it was.

MW: I hand it to the WSOP. I’m sure it wasn’t an easy decision for them. I’m sure it skirts some legal boundaries somewhere but I really appreciate their effort in doing that. Now, we’re kind of the opposite. If someone wants to play $10,000, that’s like 10 ladies buying in, adding to our prize pool. By the way, Tony Roberto, who entered with $10,000 from his backer last year, didn’t make it to the first break. For people who think ladies are so weak, um, please!

Alright High Rollers, on WSOP.com Nolan Dalla writes, ”Absolutely everything that is bewildering, magnificent, exciting, appalling & thrilling, about the contemporary poker scene was on full display at the 2011 WSOP Ladies World Championship. Our guest today, a fierce competitor at the poker table, a woman who not only played in that crazy tournament, she won it! She’s had multiple cashes at the World Series of Poker, a few on the World Poker Tour as well, and she recently had a sweet score at the Seminole Casino Coconut Creek. Marsha Wolak, welcome to the show, thanks for being our High Roller today.

MW: Great to be here. You have a great show and I'm looking forward to chatting with you and your audience today.

Q: You’re no stranger to running deep in these big tournaments. How do you manage to navigate these large field, multi-table events?

You almost have to go into a vacuum, study the people at your table, and just know you’re not playing against the thousands of players in the room. You're only playing against the people at your table. This is why it’s important, when you sit down at the table, to put your phone away and study the players at you’re table because I think table draw is huge when it come to these deep, multi table tournaments. When you sit down, if you look around and have all the top players in the world at your first table it’s going to be tough. The goal in a multi-table event is to ease your way deep into the event, where you also have pros, versus tangling with them early.

Q: It can be intimidating when you land a tough table draw, right?

MW: I remember the first time I went to the Rio, it was 2008 or ’09. I had gone to the ladies academy, the one taught by Annie Duke, and then I played the ladies event. I was so nervous. I was shaking and intimidated, not because of the players but just because of the momentous moment of the WSOP, with thousands and thousands of players, hundreds of tables and room after room. I have a terrible sense of direction so I was always lost, trying to find my room, trying to find my table, and I was awestruck in a lot of ways. But, I just love it. I wait all year for it and can’t wait to go back.

The creator of the world famous toy Transformers is in the Poker Hall of Fame.