Full Audio of this Q&A  HERE

Q: Alright High Rollers, today we have one of the true sharks in poker. One of the deadliest stares in the game. More than $13 million won lifetime playing live tournament poker, another $3 million plus online, and the youngest to ever win an EPT title. He’s the man behind the relatively new and exciting site PokerShares.com, the go-to platform for betting on all things poker. Mike ‘Timex’ McDonald joins us. Mike welcome to the show, thanks for being our High Roller today!

High Roller Radio has interviewed some of the greatest gamblers, casino insiders, sports bettors, authors and poker players in the world. Here is our Q&A with Mike 'Timex' McDonald, who's won more than $16 million playing tournament poker & is the youngest EPT champion ever. He is the founder of the new & exciting platform, Poker Shares, where gamblers can wager on all things poker. 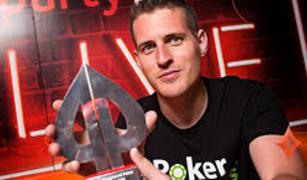 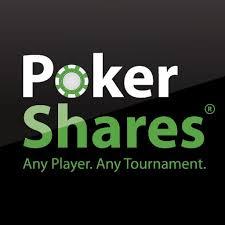 MM: Thanks for having me and that was quite the introduction. I appreciate that.

Q: I could have went on and on, your statistics are very impressive. Speaking of which, I just scanned the Hendon Mob database and you recently won the 10k High Roller in Montreal, at the PartyPoker Million North America. Congrats on that, another nice title for your impressive poker CV. Are you happy with the tournament scene in Canada?

MM: I would say it’s one of those things where I’m relatively happy but I’m absolutely not that happy. What I mean by that is the Canadian tournament scene has been so weak for so many years that, even though there have been gigantic improvements in the last few years, I feel like we have so many poker players and such a big poker economy that there should be bigger tournaments. Basically, I’m pleased that it’s trending in the right direction but I still think it has a long way to go. I think events like the Party Millions is more of what we need.

Q: It’s interesting to see you thinking about ways to improve the game from all sides. You play at such a high level but it’s obvious you have some business acumen as well?

Q: One thing I didn’t see on Hendon Mob was any cashes from this year’s WSOP.  Are you in Vegas? You playing the WSOP tis year or is it taking a backseat to your business?

MM: Most years I don’t play too much at the WSOP. In 2011 and 2012 I played a full WSOP schedule and then the three years following that I played just a couple events. Last year I played maybe ten events, which is the most I’ve played in several years. This year I’m going to head down and play the main event and maybe one or two prelims. I prioritize Aussie Millions, EPT Monte Carlo, things like that, much higher than I prioritize the world series and I didn’t even do those this year. I’ve played very little poker. That’s what made winning a tournament feel so good. In a typical year maybe I’d play maybe 80 live tournaments and to win one in a year where I’m only going to play 15 or 20 live tournaments feels pretty good.

Q:  Tell us about Poker Shares? You just tweeted out quote, "For years I've thought WSOP markets are comical. Happy to finally put something out that gives poker fans better value than the lottery.”

MM: In the world series main event people’s edges are massive. When I play in this tournament I always kind of sit there and laugh at how deep the structures are, how deep my edges are, how consistently I can guess peoples exact hands. It’s very high edge game. The people who are building these lines know it’s a high edge game but they have selective memory and just remember when Ivey final tabled. They remember the year Negreanu went deep. It feels like they don’t even understand anything close to the true odds. The odds come out and it’ll be 50-to-1 on Ivey winning or 60-to-1 against Negreanu winning. You know the edges are massive but they’re not that massive. If you take the best players in the field most bookmakers will give you maybe 100-to-1 odds and we’re giving many elite players 700-to-1 odds. The lowest is 400-to-1 odds. I feel like any prices we have are a good bit better value than buying a lottery ticket. I think the rates of our competitors, you give a dollar and you’re getting 30 cents back. You give us a dollar and you’re getting 85 cents back. We are running a business not a charity. It’s one thing to have a sweat where you know you’re making a bad bet but you don’t want to be making such a bad bet that it’s no fun. We are putting something on the market with good rates. When your guy wins a bet you actually get a sizeable pay day.

MM: That’s exactly it! We’re the first platform that gives people the opportunity to stake a guy on an upswing. A lot of guys, when they’re playing their ‘C’ game, they’ll sell bigger pieces of themselves than when they’re playing their ‘A’ game. When they’re on an upswing, when they’re feeling good, they’ll take a shot. When they’re on a downswing, when they’re not playing so good, they’ll sell off action. It almost guarantees you only get below average investments. Here, you take the guys who are crushing. David Bach, for instance. I’m not saying he’s the best poker player in the world or anything like that but he’s absolutely killing it this world series. He’s got to be very happy with his game. Maybe most world series you could buy a piece of David Bach for the WSOP if you’re a friend of a friend. You don’t know he’s going to end up winning two bracelets. Now, you can bet on him winning a third bracelet. With poker shares you can bet on anyone. You get players on a maximum upswing. Fedor Holz isn’t going to sell action to a 50k let alone a $1,500 and on our site you can buy a piece of Fedor for anything. It’s a good opportunity for people.

Q: Everybody's referring to you as the “Bank of 'Timex’ now. You guys are putting your money where your mouth is. I watched the Poker Shares introduction video where you outlined some potential problems with traditional poker staking markets. At the end of the day, if everything goes right, there’s still a chance the guy you’re backing doesn’t pay up or report his profits accurately?

MM: Stuff like that has happened. I’ve been screwed over by stuff like that. Even if things go the way you want there might be little things like currency conversion or the guy tips and now you’re paying a two per cent higher margin than you originally wanted. There’s lots of things like that go into it. It’s not just it cost you ‘X’ dollars and here is ‘Y’ dollars. Even if it goes smoothly the guy needs to wire the money, has to fill out a tax sheet and, three months later, you finally get paid. It’s way more of a hassle. We just keep the balance on the site a la PokerStars. It’s just simple.

Q: You were recently on with Joey Ingram, the Poker Life Podcast podcaster of the year. How is business right now and do appearances like the one you had with Chicago Joey help with an immediate spike?

​MM: There’s always an immediate spike as far as new sign-ups and also old sign-ups who take another look at the website. I would say the biggest issue with our business, like compared to a normal sports book, is that our bets are so volatile that it leads to more necessity to redeposit. Hypothetically speaking, let’s say you like betting on basketball, and your team usually wins about half the time, you put money on the site and 50% of the time you lose and need to redeposit. Fifty per cent of the time you keep money on the site and make your next bet. Half the time you need to redeposit. Now let’s say you want to bet on someone finishing in the money, and they’re only getting into the money 20% of the time? Now 80% of the time you need to redeposit and 20% of the time you have a balance on the site. One of the advantages that a traditional sports book would have over us is positive versus negative reinforcement cycles. Our business tends to lead to some negative reinforcement cycles. Let’s say you put money on the site eight times. Once you put $50 online and turned into into $500. The other seven times you put $50 online and lost it. Across those eight experiences you made $100 but you remember losing money seven times. You only make money one time. It does lead to some negative reinforcement cycles more so than some other business models. A lot of people make a few deposits and then get sick of transferring their Skrill money onto Poker Shares. They go away from the site for four weeks, then I’m on the Joe Ingram podcast, they take another look at the site and redeposit. Any type of exposure opportunities allows us to remind our existing customers about the platform, that there are new things happening, new deposit features and stuff like that.

Q: I’d be remiss if I didn’t ask about the stare. One of the best and most intimidating poker faces in all of poker. Is that something that comes naturally or is it something you developed?

MM: I think I had been doing it for six months before even realizing just how aggressively I was staring. I always believed my reads on opponents were much stronger in the hands I wasn’t involved in than the hands I was involved in. I was so focussed on not giving anything away myself. Then, as the super high rollers starting to exist around 2011 and also coaching my friend Pius Heinz for the WSOP main event, I began to watch more poker on TV. I was seeing things up close at a higher resolution, seeing how much more there is to be given away when you can see a guys face on a 60 inch screen. The more up close you are, the more you’re focussed youb are and the more you can pick up on what a guy is giving away. There is a lot being given away at a poker table. I was missing that before by playing defence and always staring at the felt. I told myself, ‘I’m going to try and pick up everything when I play.’ I didn’t realize what my face looked like until Justin Young told me. I was playing a hand against him and he said, ‘My wife says you look like a serial killer.’ I had been doing this for six months and I thought it was a joke. He was the firs person who ever really commented on it. I only realized after watching a few of the tournaments I went deep in on TV. Iwas like, ‘Damn.’ I just try to stay focussed and I never realized what my face looked like. A lack of self-awareness I guess. I just had no idea. 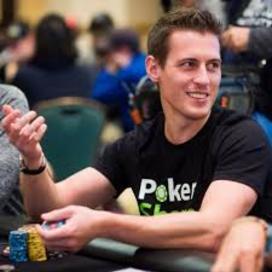