No Respect For the Raptors?

As we know, the Raptors did lose Kawhi Leonard in free agency. However, despite that significant loss, the rest of their roster has mostly been left unchanged. They kept all their other key pieces, and for the most part, have not missed a beat.

Pascal Siakiam has turned himself into an elite player in almost every way since Leonard’s departure. The Raptors also have several other stars, including Marc Gasol and Kyle Lowry. Their 46-18 record as we head into the restart is not a fluke.

I don’t think the Raptors will win the NBA Championship, but perhaps they​ deserve more than an 18/1​ or +1800 shot. The franchise was expected to have a down year after the loss of Leonard, but here they are, second in the Eastern Conference.

With that said, ​I don’t think ​they win in the NBA Championship this season. +1800 to win the title might be an excellent “lunch money” wager, but I don’t think this team has what it takes to take beat the Lakers or Clippers, even if they make through the Eastern Conference.

The Real Value - The Raptors To Win The Eastern Conference

I know they had Kawhi last year when they took care of the Milwaukee Bucks, but I still feel like there is a lot of value with this team to win the Eastern Conference in betting markets.

Currently, BetOnline.ag has them at ​+750 or 7.5/1 to win the Eastern Conference. ​I love this price because we only need to win this bet 12% of the time to breakeven. Remember, the Raptors beat the Bucks last season in the East to ultimately win the title.

There is no doubt Milwaukee is the better team. In fact, by regular record season, they’re the best team in the NBA. However, these odds are too enticing to past up for an excellent Raptors team, and one that I think is easily the second-best team in the East.

Take the Raptors to win the Eastern Conference at +750. 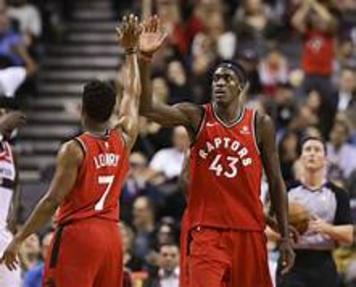 Are the Toronto Raptors Being Undervalued?

After a long hiatus due to the Coronavirus, the National Basketball Association returns this coming Thursday with a marquee matchup between the Los Angeles Lakers and Los Angeles Clippers.

The Western Conference is loaded with talent, but what about the East?

Can the Toronto Raptors Repeat as NBA Champions in 2020?

Joseph Falchetti, editor-in-chief of Safest Betting Sites analyses the NBA restart, with odds and betting favourites, and examines how the Raptors may fare.