Q: i’m wondering if you can walk us through your role in setting up some of these games. Are you reaching out to the players? Are they contacting you? I know you’ve got regular games in place but how do attract some of these igger names and put some of these high stakes games together?

RF: Every situation is a little different but I’d say, in general, it’s all about networking and having a relationship with all these different players, then you’re able to put these things together. For this one, for example, Phil Hellmuth just contacted me the other day, randomly, and said, “Hey I’m going to be in Los Angeles and I have a day to play before I have to fly back. Do you have a game I could play in?” I had been in contact with him, talking to him about Main Event Champions Week. He just reached out to me and said he was going to be in LA doing a shoot for the WPT and the next day, the 31st, he was going to be in LA all day and didn’t have to fly back until the night. He wanted to know if there was a game he could jump into to. I said, “Let me think about it.” We had a PLO game scheduled that night but, you know what, if Phil Hellmuth wants to play let’s set up a game. We brainstormed. I said, “Let’s do a special game that afternoon. Let’s do a $50/$100 game and we’ll put something really cool together.” We talked about who we should invite, who should be in the game. I said, “Should I invite Antonio?” He said, “Absolutely, let’s do it.” After that, I hit up Antonio Esfandiari and let him know that Phil was coming into town and he wanted to do a special game. He said, “Sure!” He asked for a few stipulations and I told him I’d make it happen. I hit up Randall Emmett, a television producer who plays on our show, and he said, “I’m in!” He loves playing with these guys. I hit up a couple of other players who have played on our Friday shows and, all of a sudden, we have a game together. That’s how that one worked.

In general, you usually get a couple of guys to say yes and it makes it easier for everyone else to say yes. Doug Polk Week came together over a year ago, when we originally had him on in February. I had been in contact with him through social media and I said, “Hey, we should put together a special week for you. We could do a bunch of different games. It would be really cool.” With his brand and what he was building at that time, he said, “Oh my God, that’s a great idea. Let’s do it.” We brainstormed what each day would be and that was pretty much it. Doug was really easy to work with. When Doug Polk came back in November, I got Jungleman to come, Dan Smith and some other guys as well. It was really just me contacting people. I had Jungleman’s contact and told him we were putting together a big game and asked him if he wanted to play. We talked back and forth until we made it happen. Every situation is a little different but I think when you have a name like Live at the Bike, and people know what it is, the brand, it helps a lot. When you have a couple people get involved who are already going to play that game it makes it a lot easier to get the rest of the line-up together. A lot of the local players, the recreational players, the businessmen, they want to play with these big names. It’s easy to get them to play with those guys. You just have to make sure the stakes are reasonable enough for them. For the name pros, a lot of them just want to play in good games. Some of them, like Polk, like to get out there and promote themselves. So that’s easy. Other guys just want to play in good games. If we put together a good game that’s all that matters. That’s always my first priority for any of these things. I want to put together a good, action-packed, entertaining game.

Q: I think this game on January 31st is going to be all that and then some. Phil Hellmuth, Antonio Esfandiari, Randall Emmett and some other action junkies. It promises to make for great table dynamics. What is it about a Hellmuth/Esfandiari pairing at the poker table? It always seems to make for dynamite viewing. It seems like Antonio’s perfected the art of the needle?

RF: They both respect each other a lot. I think that's it. Antonio will just needle Phil and make fun of him and it’s about how Phil reacts to that, takes it and kind of reflects it back. That’s a lot of it. Phil is the type of personality that will let other guys, guys he respects,  make of fun of him. Seeing that interaction at the table is definitely entertaining. 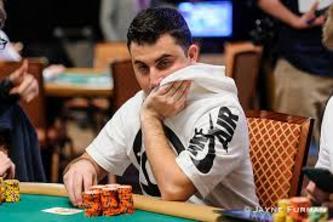 Why you should be! 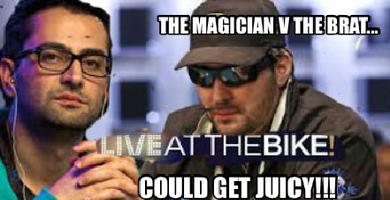 How Does a High Stakes Cash Game Come Together?​

Alright High Rollers, I saw the tweet yesterday from Live at the Bike and immediately got excited. A special game’s been organized featuring two of the games BIGGEST names, I mean two of the true superstars of poker, Phil Hellmuth & Antonio Esfandiari. It’ll run January 31st on Live at the Bike and our guest today helped put it all together. He's a former basketball researcher at ESPN, is now a current cash game pro, commentator and producer, @TheRyanFeldman on twitter, Ryan Feldman welcome to the show man, thanks for being our High Roller today!