His patented celebration? A big roar, and it was on full display during their tilt to decide the Grand Slam in a finale filled with fireworks. So heated, things boiled over in the 27th leg. All tied at 13 in a race to 16 for darts glory, the Eric Bristow trophy and the $110,000 for first, and with tension mounting, and Anderson the big favourite to win, the Welshman cleaned up a 25 finish, a big moment, and as he went to celebrate, Anderson approaching the oche, they bumped. Already steaming, they had words a few legs before, Anderson then pushed Price. Price stood firm and they had more words.

​​​Obviously put off, by not only the 'Iceman’s' antics but also his fine play, Anderson wouldn’t win another leg and price snagged his first ever major title. Wales first ever too. History!

There were no handshakes, it was just pandemonium, and as confetti reigned down so too did the boos. He didn’t seem to mind though. In the post match interview, he suggested, “sometimes the crowd is with you, sometimes they’re against. The louder they boo the better I play!”

He also said this: "I knew if I kept the pressure on he was going to crack and he did!:”

On the contact? ”I’m throwing my darts,” he said. ”He needs to hold back and wait his turn. I knew I was going to beat him. He can’t handle playing me."

​
The headline for our recap video on Youtube was, "Contact Made in One of MOST Contentious Finals EVER!"

It was a rowdy affair and one that made headlines the world over. As you might imagine not everyone was happy. There was a storm on Twitter.

"One of the most controversial darts matches I’ve ever seen,” said commentator Rodd Studd.

"If any of our youths played in the manner you did," said Kirsteen Campbel, "We’d boot there backsides! Absolutely no respect. Gary has his faults too but most of the time he was provoked. She then suggested Gerwyn could learn from youth players, "Go up have your throw, get your darts out the board & get out the way!”​

This sentiment from Emil Steinmman was echoed by many, "Trying to annoy your opponent so he will perform less, isn't fair play. That doesn't belong on a darts stage. I hope you won't be playing early matches, so I can watch the darts when my children are in the room.”

"If You Can't Handle the Heat, Get Outta the Kitchen!"

Yes, there was a lot of criticism of Price. He was incredulous. "I struggle to see what I do wrong apart from celebrate and show my emotions,” he said. "if you can’t handle the heat get outa tha kitchen!”

"Cheering an 81,” said Mark Wilson, "you know exactly what you did but well played. What's next ? Screaming when you hit 26?"

"Believe it was 96,” was Jason’s reply.  "And was at a crucial point, also every time it rattled Anderson, so why not?"

"You didn't do anything wrong," said Bethan Jones. "Anderson didn't like that the game wasn't going his way and even resorted to physical contact. Did you see Gez retaliate with physical violence? No just 180’s!"

"Such mindgames are part of any sports,” tweeted Gunner. "If I was Anderson, I'd have simply waited 2-3 seconds longer before stepping forward and had a laugh about how Price was acting.  Never let your opponent come to your mind that way. In any sports!”

"Only way to silence him” said commentator and former darts pro Chris Mason, "is to give him nothing to celebrate. Easier said than done I know."

Important to note, many pro dart players celebrate. Price’s opponents at the Grand Slam for instance. There was fellow muscle man Josh Payne in the last 16. Tied at five mid-way through their showdown, he roared too. He was fired up. Price dominated the second half to win 10-5, but it was smles and camaraderie during the handshakes. In his quarterfinal with Simon Whitlock, th 'Wizrd' roared too, although no one in theitight mind would evey accuse Simon of foul play. He's well respected. Even in the finale, Gary Anderson had some moments, reactions, even a wry smile for his family, as if he was enjoying it. Of course, that’s when he was ahead and seemingly in control."

"The thing is,” said Tom Dixon, "Anderson was giving it back when he was leading, so can’t say anything"

Nige DeBloom said "MvG does it and no one has a problem" Scott Large had the same thought, "MVG does it all the time but apparently you're not allowed to?"

"How do you think would Eric & Jocky would have approached that behaviour?” asked Kevin.Eric maybe win the mind games & Jocky throwing haymakers?"

"Jocky wilson would have nutted Price,” replied Wayne Stewart. One of the best ever ,Jocky was a a two-time world champ Remember when Cliff Lazarenko gave him the finger on stage?

"You did nothing wrong,” tweeted the Whiskey Wingman. "At worst, a critic could say you celebrate too often, but that is being overly picky. If people want robots, let 'em go to a car plant. If Ando doesn't like it, tell him to shoot better. Well played and ENJOY THE VICTORY!!!"

Speaking of characters, how about legend Bobby George:

Price certainly does deserve credit. He faced Ando, all that pressure and prevailed.

"Odds on a #Darts player to hit Price during 2019?” The question from @OcheBalboa1.

John Gwynne reminded us of Alan Evans, suggesting there’s nohing new to the Price approach. “The Welshman got under the skin of many a foe. He an I came to blows once, and we were on the same team. Not that i’d even consider taking on Gerwyn mind you."

The PDC's Dan Dawson gave us his two-cents worth. "If Gerwyn is found to have made noise while Gary was throwing, I'm assuming that'll be a £3k fine. Gary shouldn't have been in the exclusion zone, which led to the argy-bargy."

"I have to admit,” said Darren Fursdon. "Gerwyn did nothing wrong, they don't like each other and Gerwyn out psyched Anderson. He is a very bad loser."

Respect in pro sports? Not really! Darts these days is cut throat, there’s big money at stake, legacies, and of course bragging rights.

"I think it makes for great TV," said Danny McGarry. I wholeheartedly agree with that, gripping suff and great darts too.

Whatever your thoughts are of Gerwyn Price, there is no doubt the guy is an elite arrow-smith and this week in Wolverhampton he found the winning recipe.
Sprinkled in a few 180’s, a few ton plus checkouts, added in a cup of confidence, an ounce of heart, and then stirred it all up. And boy did he ever!

Contact and controversy at the Grand Slam. Last words to the man at the centre of it all, "if you can’t stand the heat get out the kitchen."

Exciting, enthralling, epic, the final match at the 2018 Grand Slam of Darts had everything; big scores, big checkouts .and a whole lot of controversy, even contact between the two players. And, it has the darting world divided! Mind games or just madness?

We knew what they were bringing to the table. The 'Flying Scotsman' was packing pure skill, fantastic and fluid, who many say, when he's in top flight he’s unbeatable. He's a two-time world champion! In the 'Iceman’s Corner - a competitive flame that burns bright, a Welsh wonder, who's transitioned from pro rugby to pro darts, it seems, with relative ease. Gritty & tough, he is very loud at the oche. 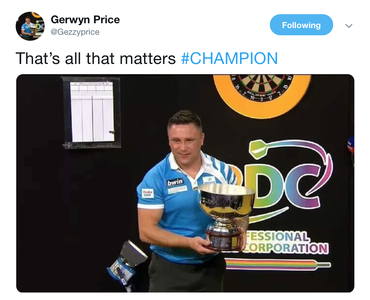 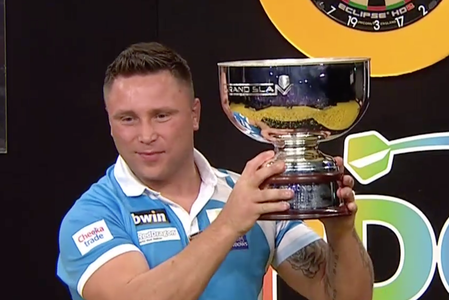 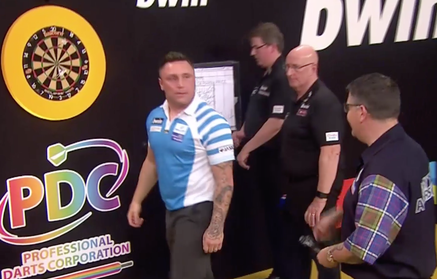 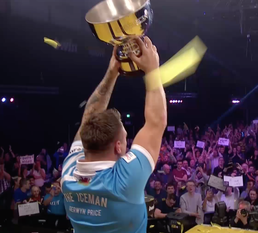 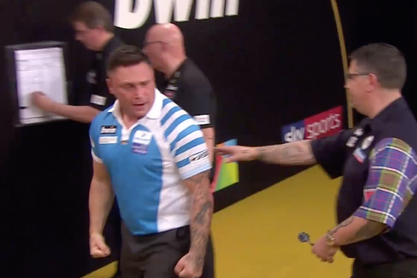