#1 The Blacksox
Eight Chicago White Sox were banned for life for fixing the 1919 World Series, including the most noteworthy 'Shoeless' Joe Jackson. Jackson, a superstar, was just 31 at the time and had a .356 lifetime batting average, still the third highest in history. The players weren't banned until just before the 1921 season. Jackson's 1920 season?  .382, 12 homers and 121 RBI's.

In September 1920, Jackson testified before the Cook County grand jury. This is how it was reported in the Chicago Herald and Examiner:
"As Jackson departed from the Grand Jury room, a small boy clutched at his sleeve and tagged along after him. 'Say it ain't so, Joe,' he pleaded, 'Say it ain't so.' 'Yes, kid, I'm afraid it is,' Jackson replied. 'Well, I never would've thought it,' the boy said." 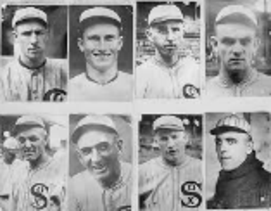 #3 Paul Horning & Alex Karras
Horning, the Packers' "Golden Boy" running back and 1961 MVP, and Karras, an All-Pro defensive tackle for the Lions, were forced to sit out the 1963 season, suspended by NFL commish Pete Rozelle for betting on NFL games and associating with gamblers. Hornung had bet up to $500 on games, said Rozelle, and Karras had placed at least a half-dozen $50 to $100 bets.  Hornung apologized. "I made a terrible mistake," he said. "I am truly sorry." Karras also said he was sorry, in his own way. Upon returning to action in 1964, he refused when an official asked him to call the pregame coin toss: "I'm sorry, sir," he said. "I'm not permitted to gamble."

#4 The Mob Connection
During the 1978-79 hoops season, Boston College's Rick Kuhn joined forces with a known mobster named Henry Hill, of New York's Lucchese crime family, the guy who was the basis for the movie Goodfellas.  Kuhn helped to fix nine games and says he also convinced teammates Jim Sweeney and Ernie Cobb to join in.  Kuhn, who landed a point-shaving record 10-years sentence (later reduced to 28-months), says they picked up a cool $10,000 for their efforts.  Neither Sweeney nor Cobb was charged.

#5 Unlucky 13
After losing 45-17 to Syracuse on Oct. 26, 1996, BC football coach Dan Henning heard that some players might have bet against their own team. He informed the appropriate university officials. As a result, 13 players were suspended for the rest of the season and six were banned permanently. Henning, scarred by both the scandal and a poor 16-19-1 record at BC, resigned at the end of the season.

Carving Points for Cash & Cocaine
John 'Hot Rod' Williams was among the players busted in a 1985 scandal involving five players at Tulane.  Seems they needed the Benjamins and the Blow.  They were accused of shaving points in two games.  Williams allegedly pocketed close to nine thousand dollars.  He was indicted on five crimial counts, but following a mistrial the charges were dropped.  'Hot Rod' went on to enjoy a nine-year career in the NBA with the Cleveland Cavaliers.

Basketball Badness
So many instances to choose from, so many points shaved in 1951 that this has to be the biggest scandal in college basketball history.

In 1999, New York Newsday listed the scandal as the worst event in New York sports history -- worse, even, than the Giants and Dodgers leaving town.

Note:  Thanks to ESPN.com for some of the information on tis page.

​"The matter of Mr. Rose is now closed," commissioner A. Bartlett Giamatti said after the ban was made public on Aug. 24. "Let no one think it did not hurt baseball."