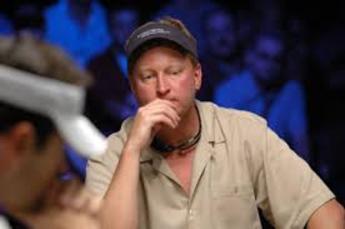 The 2005 World Series of Poker main event final table will go down as one of the highest rated television shows in poker history. Two of the game’s biggest stars were part of it and each had a healthy chip stack. Andy Black, the eccentric Irishman, had a huge chip stack going into play but would eventually blow up, bluffing off his chips in quick and demoralizing fashion, and Mike Matusow, ‘The Mouth’, who watched in disbelief as his pocket King’s ran into the pocket Aces of Scott Lazaar on just the second hand of the final table. In what has to be one of the most dramatic moments in WSOP history, Matusow clenched his teeth, pointed to the area of the table where the dealer would lay out the flop, and screamed, “KING!” Voila. The dealer turned the cards and there it was, that called-for King. The problem? The flop also contained two hearts and when the turn card brought another heart, Matusow and the entire room realized Lazar, a magician by trade, held the Ace of hearts and needed just one more symbol of love to perform his biggest trick ever, toppling the set of Kings of Matusow. ‘The Mouth’ went suddenly silent and buried his head in the shoulder of friend as the dealer dealt the river card. Bam! Heart! Lazar let out a primal scream, “Yes,” noting the ‘Best hand won.” Marusow, visibly shaken, as if defeated in every sense of the word; physically, emotional, mentally, was crippled and out of the tournament a short time later.

“That was the SECOND hand,” Dannenman told me, emphasizing the word ‘Second’, expressing whole heartedly his disbelief such a massive pot would occur so early on in the evening’s proceedings.  Our interview was set up over facebook and I was excited to talk to him. I mean, runner-up at the 2005 main event and, because of his character and that fact he really enjoyed his moment in the spotlight, he's one of the most recognizable faces in the game today. On ESPN, he came across as a guy you could have a beer with. See, nowadays everyone’s wearing a hoodie or sunglasses. One guy’s checking his iPad, another is typing something into his iPhone. Too many ‘I’s in poker maybe? The interview was underway and I wanted to know if he saw that as a problem, a detriment to the game?

“I was watching a bit of it last night,” he began, referring to the 2013 ‘November 9’, eventually won by a 23 year old out of Michigan named Ryan Reiss. “It was BORING. I mean, were any of these guys having fun? Nobody was talking. This should have been the time of their life. If you spend $10,000 to enter a tournament, you know, to fulfill a dream and play at the World Series of Poker, that’s a lot of money. Don’t you think you should have fun? I get told a lot our final table in ’05 was one of the best ever, in terms of entertainment. We were having fun. And, when guys got knocked out we were hugging each other. Hugging each other man.”

There was an interesting and revealing moment later on at the ’05 final, revealing in the sense it gave the viewer a sense of Dannenmann’s motivations and approach to his paly that night. He had opened a pot for a raise holding Ace, 10, and was re-raised by Joe Hachem, the Australian chiropractor who would eventually be crowned world champion. Hachem was holding Ace, Jack, a dominating hand over Dannemann’s.

“God, this would be a horrible call, this would be absolutely horrible.  I’ve played good cards all week long,” he said as he contemplated one of the biggest calls of his life. “I gotta check something.” Dannenmann reached into his pocket and pulled out a crumpled piece of paper, which contained notes he had written to himself. “My Notes,” he said, as he tried to iron out and flatten the paper, to make it readable. “Number one; Have fun. Number two; you have nothing to lose. Number three; Play tight.” Dannenman turned over the note and on the other side it said, “Not calling a raise is only a small mistake.”  As he read aloud that Number 4, ‘Not Calling a raise is only a small mistake,” he folded his hand much to the chagrin of Mr. Hachem.

"There should be a bumper stick that says, 'Fold to the money baby.’ That's what I did. I kept finding reasons to fold. I couldn't out play them! I mean, Matusow was bluffing me left, right and centre. Every time someone got knocked out I made an extra $100,000, then it was $300,000 more. Then, I was like, 'Holy shit! That was a million dollar jump.' I just kept finding reasons to fold."

Steve Dannenman’s demeanor is a welcoming one; he’s always laughing, joking and smiling. In 2005, he was presented with the opportunity of a lifetime - a chance to play at the main event final table and he took it, finding reasons to fold all the way to 2nd place and a whopping $4.2 million.  And, that’s money, as Dannemann says, “that won’t be going back into the poker community.”

Have Fun at the Tables!

"I just kept folding to the money!"

- Steve Dannenmann, who finshed runner-up to Joe Hachem at the 2005 World Series of Poer main event for  whopping $4.2 million. It was a stacked final table, featuring the likes of Andy Black and Mike Matusow, but it was Dannenmann who seemed to be having the most fun throughout. Great run for this former guest of High Roller Radio.