IDF: On the Pro Tour this year, you've had some tough draws, facing van Gerwen twice in Round 1 and also Rob Cross. Do you think you're getting closer to beating one of these big names, especially after running van Gerwen so close the last time?

SL: I feel that I am playing well against the big names (van Gerwen twice and Cross in round 1 of Players Championships), I just have missed crucial shots at the wrong times which has let me down.

IDF: How do you think your form this year is compared to last year? Do you think you are recreating your brilliant first year in terms of how you're throwing?

SL: As much as results haven't shown this as much so far this year, I do believe I am playing a bit more consistently than I had been last year. Hopefully I can keep going have another good year.

IDF: What was your highlight of 2017? Playing Barney in Wolverhampton? Qualifying for the World Championships? Something else?

SL: My highlight of the year was definitely qualifying for the World Championships especially as it had been my first year on the Pro Tour circuit. Qualifying for the Grand Slam was also a great experience and because of the format I got brilliant stage experience from it. Also I was happy to finish ranked inside the top 64 of the PDC Order of Merit within 1 year. I hadnt expected to climb that high as quick as I did.

IDF: Finally, what are your aims for the rest of 2018? Maybe win a Players Championship event? Qualify for the Worlds again?

SL: My main aims for this year are to build on and improve from last year's breakthrough!

Interviewer's Note: Thanks to Gerry Kennedy (@gezzer1963 on Twitter) of Shamrock Darts Management, who is Steve's manager for being so helpful in arranging the interview and of course, thanks to Steve for doing the interview in the middle of his preparations for his first European Tour event of the year, the 2018 German Darts Grand Prix.

Best of luck from @irishdartsfan at the weekend. You can be sure I'll be here cheering you on! 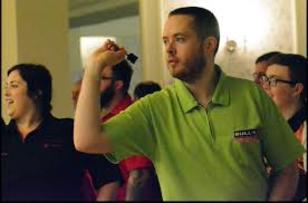 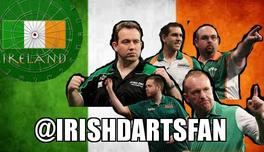 IDF: Hi Steve. How do you feel your preparation has been, coming into your first European Tour of the year? Do you feel confident about making a run this weekend?

SL: I feel confident, my practice has been going well and I've been playing well. I have a lot more stage experience than I had this time last year so I'm hoping that will help. It's all about how you perform on the day as well.

IDF: What would be a good weekend for you? Would you be happy with a Last 32 or do you think you can go further?

SL: The aim is to get over the first game, after that then take each game as it comes. European Tour events are the ones you want to be getting good runs in and gain some momentum.

IDF: How does your preparation differ from a European Tour to a normal Players Championship event? Do you have to adjust to the big stage?

SL: My preparation doesn't really change much, the only difference is, if you win you don't play your next game until the following day which changes your mindset from playing numerous games consecutively in one day. ​

High Roller Radio contributor Matt, the 'Irish Darts Fan,' sits down with Steve Lennon, a professional darts player from ireland who is quickly rising through the ranks on the PDC Tour. Watch out for this excellent arrowsmith as he makes waves in the Professional Darts Corporation!

"I was happy to finish ranked inside the top 64! I hadn't expected to climb that high as quick as I did.​"

Be sure to follow Matt, the @IrishDartsFan, as he reports on darts from the Emerald Isle.

@IrishDartsFan Sist Down with the Irish PDC Star

With PDC European Tour 2, the German Darts Grand Prix, just around the corner, excitement is starting to build as Irish stars Willie O'Connor and Steve Lennon prepare to play their first European Tour event of the year.

Steve Lennon was kind enough to take some time out of his busy schedule to answer some questions for me about the upcoming European Tour event, his amazing breakthrough season last year and his hopes for the rest of 2018. It was an honour to get a few words from such a respected player like Steve and I hope you enjoy reading this as much as I enjoyed compiling some questions and reading Steve's responses.