National Lampoon's Strip Poker was released on pay-per-view in 2005 after being filmed at the Hedonism II nudist resort in Negril, Jamaica. The one-hour episodes featured various Playboy, WWE, and pin-up models competing in strip poker match-ups.

Fun Facts
Majority opinion credits the invention of playing cards and their place of origin to ancient China or 12th-century Egypt.

(Right) Did you know?
After winning his bracelet in 2010, Canadian Pascal LeFrancois posed for the winner’s photo topless after being dared by friends. He kept his word and removed his shirt fin what had to be a World Series of Poker first! 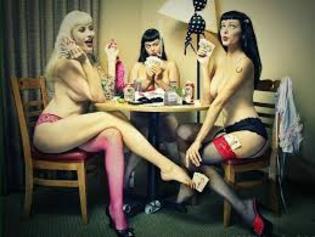 Strip Poker for Apple?
In 1982, an American computer game company, Artworx, produceda Strip Poker game for the Apple II computer. It has been ported to many other computers since then, and is still available today. Many others followed.

NOTE: Strip poker is featured as an Easter Egg in the Windows 8 card suite Card Hero.

(Right) Carmen Electra on the cover of her strip poker video.​

History
It's been suggested that strip poker originated in New Orleans in the 19th century, around the same time as original poker. It was played in brothels. The term 'Strip Poker' has only been confirmed since 1916. What began as a pranl among boys, the current co-ed version was called "mixed strip poker" in England to differentiate it from the all-male, non-sexual variety.

Strip Poker was a TV game show which aired in limited syndication exclusively on selected stations owned by USA Broadcasting, now owned by Univision, from 1999-2000, then later re-run on the USA Network from 2000-2001. The show was hosted by Graham Elwood and Jennifer Cole as the dealer.

A Woman's Game?
In 1941, the Young Women’s Republican Club of Milford, CT held a night like no other; they indulged in traditionally male pastimes like cigar smoking, poker playing, and wrestling. The night confused the majority of Milford’s male population but made quite a splash none-the-less. 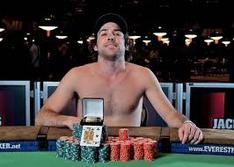 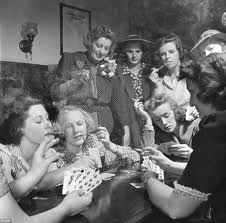 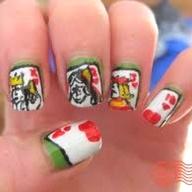 Strip poker is a party game, a variation of traditional poker, where players remove an article of clothing each time they lose a hand. Any form of poker can be adapted to the strip form, but it is usually played with simple variants like 5-Card Draw or Texas Hold'em. Played by mixed groups in social situations to generate an atmosphere of fun, strip poker can heighten the sexual atmosphere. Like other adult party games, activities besides removing clothing and playing cards might be involved, like Truth or Dare.