The statistical data below outlines why the house always wins!

The average dice thrower will roll 8 times before 'Seven'ing Out!'

The Wheel Watcher
William Nelson Damborough of Bloomington, Illinois, had an unusual talent - he was a wheel watcher. Damborough had a knack for anticipating where the ball would land and he was amazingly accurate. Between 1904 and 1911 he took the Monte Carlo casino for close to $500,000 and, keep in mind, that was early 1900's currency. Damborough ended up marrying a woman whose family frowned upon gambling and he lived happily ever after on a huge estate in the United Kingdom. 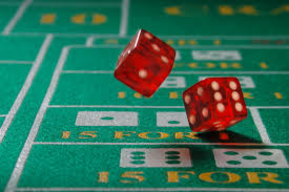 Tale of the Tape
The odds in a lottery are worse than other forms of gambling. But those other forms are also slanted toward the people running the games. Casinos, for instance, have something called the vig (short for vigorish), the advantage the house enjoys on all so-called "even money" and "true odds" bets, on which you're paid, respectively, what you've bet on or an amount proportional to your risk.

So what does the table tell us?
- If you're betting $100 an hour on roulette, you will, in the long run, lose an average of $5.26 an hour.
- True odds bets in Craps reduce the house's edge to less than 1 percent.  Next to disciplined blackjack, this is the best bet you'll have in casino.
- Slot machine odds are absolutely terrible.  In fact, casinos make two thirds of their profits from slots.
- Played correctly, a proper Blackjack system assures you of being at no more than a 2 percent disadvantage against the casino. In practice however, the house wins at a rate ten times higher-- because few players follow the perfect strategy...perfectly. 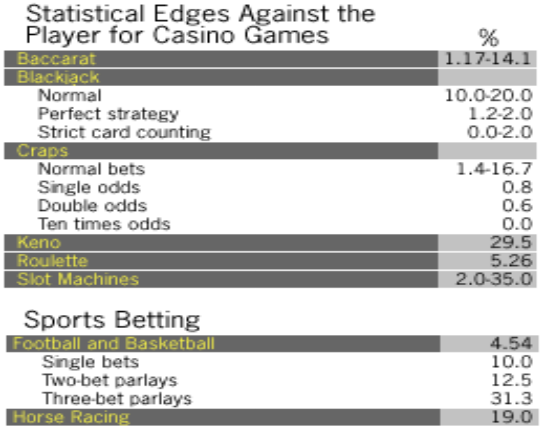 How to Reduce the House Edge at Craps