William Kassouf first turned heads in the poker world back in 2013, at EPT London, in a classic hand with Vanessa Selbst. The replay on youtube is titled, William Kassouf Running his  Mouth, it features stunning table talk that got Selbst to fold. Kassouf hen showed Jack high! Well, the Englishman’s been turning heads ever since.

His deep run in the 2016 World Series of Poker main event, the stuff of legend. Who can forget that epic hand with Stacy Matuson? Bluffed with 9-high and his constant chatter resulted in a Matuson muck. When he flipped his cards over, '9 high like a boss' was born, a phrase still being uttered in poker rooms everywhere. With two tables left in the main, Kassouf solidified his role as 'centre of attention' when the others complained to tournament director Jack Effel about his incessant table talk. What they called irritating & annoying, Kassouf called “speech play.” Then, the Griffin Benger hand. "Check your privilege,” the Canadian said, before turning over Aces. Kassouf had Kings and busted in 17th place for close to $340,000. The Hendon Mob database puts his total live earnings at $1.4 million. His largest cash, $555,000, came at EPT Prague last year.when he took down the 10k high roller event.

Well, this week, the Kassouf brand took a major hit. "Drunk Like a Boss?" was the headline at Cards Chat, an article by Joe Sofen. "Intoxicated William Kassouf Steals Chips, Loses Grosvenor Sponsorship” he writes. No, the headlines were not good. "Kassouf Issues Statement After Being Caught Stealing Chips,” was the bold print at PokerTube. PokerNews had the story too; "Kassouf loses sponsorship when caught palming 100 pound chips." former guest Chad Holloway with the details and highlighting an @ShaunDeeb tweet: "Just got a very interesting message about William Kassouf,” Deeb said. "Ccaught palming $100 chips at roulette table and banned from all properties and dropped by his sponsorship. Shocked to hear it but now we know where his buyins were coming from!" He then added the hashtag #goodriddence.

Deeb of course, no fan of Kassouf’s, that’s a well known fact. Deeb then asked, "How far is to hollywood?" That tweet included a meme with Kassouf’s face pasted over the Sharon Stone character caught stealing chips in the movie Casino. Deeb had himself playing Robert De Niero. Now, Kassouf has issued an apology via social media suggesting it’s with "great sadness" he had to write the statement.

"Last weekend,” it reads, “during the course of a drunken night playing roulette with friends, I made an error in judgement, which I greatly regret, something I accept full responsibility for. I have apologized,  and will apologize again to my friends with me that night, for my foolish behaviour. As a result of the embarrassing incident, my sponsor, Grovensor Poker and I, have mutually agreed to part ways. I would like to thank-everyone at Grosvesnor for all they’ve done for me."

It goes on, "I would like to apologize to my family, friends, fans, and followers for my behaviour. I accept the consequences and would now like to draw a line under this whole matter and move on. I will continue to do what I do best; bring fun and entertainment back to poker, that’s what’s most important to me in my poker career. Thank-you for understanding, much love!, Will!”

Reaction on social media was quick and harsh. "You dont even say what you did bro” stated an incredulous Pablo Martinez.

"He stole money off another player at a roulette table,” said the OchoShow. "His friend,” replied @number10_, "gotta get those buy-ins!"

"its worse,” added OchoShow, "the casino was putting him in a small tourny every day. He literally got fired from a place giving him 100$ a day to play tourneys."

"I’m not sure a statement likes this achieves anything,” David Lappin’s thoughts here. "You’ve offered no clarification. While it’s good to come clean, giving no detail as to what happened and saying things like you and Grosvenor have ‘mutually agreed’ to part ways seems disingenuous at best."

@SageDonkey wanted a deeper dive into the why’s of it all. "May be better to also explain the rationale behind taking the chips, even if the rationale was very warped by the affects of alcohol. Casinos are artificial places & gambling, as well as alcohol, can do strange things to people."

"Homie a buster,” tweeted Aaron Lerner, asking "is theft a punishable offense? Possible jail time, where he would get his cheeks busted?”

Joe Lucas put out a mem of Kassouf in pin stripes. it wasn’t all hate though, @Grind2WinPoker said, "Don't sweat it. People have done worse and gotten away with it. Most of your following I'm sure can forgive you for whatever happened. You'll still have great opportunities and wins ahead of you boss.” This got Scotty involved, "Don’t sweat being a thief? Is that what you’re saying?"

"Stealing something once doesnt make you a thief for life,” Grind2WinPoker countered. "He made a mistake and owned up to it. If we see a pattern, then you can call him a thief."

"Of course, what was I thinking?” Just apologise and it’s all good. If you’re ever caught stealing, say that in court. I’m certain they’ll just let you off with it," was the Scotty retort.

Kassouf’s twitter bio reads, "I'm a solicitor by profession, also a professional poker player. chilled-out, fun loving kind of a guy, always up for a challenge and a good laugh!”  A tweet from Killingbird really drove home the point though, "stealing is neither entertaining or fun!” 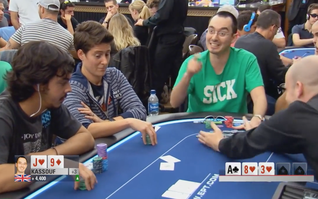 Love him or hate him, William Kassouf is a damn good poker player. And, he's one of the most polarizing figures in the game; deep run in the main event, subsequent sponsorships, world-wide press, high profile tv cash games - lots of air time! All of it helping to build the Kassouf  poker brand. So why then is he publicly apologizing for a night at the roulette table? 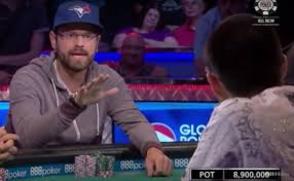