Favourites to WIN the World Cup of Darts? 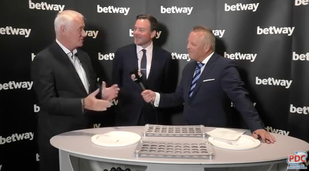 The World Cup of Darts

With the World Cup of Darts only 2 weeks away, excitement is starting to build amongst the 32 countries preparing to compete. One of the most, if not THE most, important aspects of this event is the draw. Get The Netherlands in Round 1 and you're done! A team of debutants and you may fancy your chances.

Today, a short overview Northern Ireland and Republic of Ireland; who they were hoping to draw as opponents? And, who their actual opponents are. With that in mind, all eyes were on MC John McDonald, Betway's Alan Alger and the PDC's Barry Hearn as the balls were pulled from the barrel. ​​

​With Brendan Dolan and Daryl Gurney for Northern Ireland, and Steve Lennon (debutant) and Willie O'Connor for Republic of Ireland, the draw will be important, especially for Steve and Willie, who could get any of the seeds.​​

"Get the Netherlands in Round 1 and you're done!"

Who Would You Want to Draw?

I have divided the remaining 30 countries into four extremely broad categories based on whether I think this country is:

(These categories are very broad and the countries you would put into each might be completely different than mine. It all comes down to opinion!)

So first off, I'll start with who I thought would have been an excellent draw for either of our teams to get. Of the 30 other teams competing, I have labelled 11 of them 'EXCELLENT' draws/opponents for Northern Ireland and Republic of Ireland. They are as follows: Brazil, China, Czech Republic, Denmark, Gibraltar, Greece, Hungary, Italy, Sweden, Switzerland and Thailand.

Of course, there are some super players in this category, Diogo Portela, Per Laursen and John Michael come to mind. Again, if the darting Gods blessed us by pairing our bys with anyone of these 11 teams I would have been delighted!

My next category consists of those teams I considered to be a 'DECENT' pairing for the Irish teams. I have put 10 teams into this category, they are as follows: Canada, Finland, Hong Kong, Japan, New Zealand, Poland, Russia, Singapore, South Africa and the USA. As you can see, there are a lot more familiar faces in in this group. The likes of Canada, Poland and the United States would easily be considered poor draws depending on how you interpret the game. I am giving the label of decent draw to those I consider underdogs to both Ireland teams. If you are a decent draw for us, we are the favourite!

Of course, it would be very hard to call some of these matches, especially with Republic of Ireland. Who would win, for instance, between Steve and Willie versus John Part and Dawson Murschell? Would Lennon and O'Connor be favoured over Ratajski and Kanik? These contests could easily go either way. But as I said, it all comes down to opinions and anyone who reads this may completely disagree. I would be delighted to hear what others have to say. The Republic had a 32% chance of drawing one of these 10 teams while Northern Ireland had a 42% chance.

Moving on now to those teams I considered to be a 'POOR' draw for our two teams. YOU DON'T WANT THESE COUNTRIES! There are only 5 teams in this category, but they are strong: Austria, Belgium, Germany, Spain and Wales. At this stage, we have really reached the big boys of darts. We are talking Top 16 players; Mensur Suljovic, Kim Huybrechts and Gerwyn Price to name a few. Northern Ireland, a seeded squad, could only potentially play two of these teams. As the boys are a seeded, they will avoid the other seeds, which means they could draw are Germany and Spain. These are tough teams that could really worry Daryl and Brendan, although I would still expect them to pull through. Again, Northern Ireland had just an 8% chance of drawing a team in this category.

As for the Republic of Ireland? I would expect Steve and Willie to be slight underdogs against teams in this category. As I said, the calibre of player is increasing with each group. These teams are the best of the best. If Ireland was to draw one of these teams, I would still give the lads a great chance to go out and beat them. Republic of Ireland had a 16% chance of getting a poor draw in Round 1.

Finally, the elite 4. These are the teams, to be honest, who be an absolute "AWFUL' draw for Steve and Willie. I'm not saying they couldn't win but these 4 tams are a big step up in terms of ranking, scoring power and experience. If the darting Gods were on our side, we would avoid Australia, England, Netherlands and Scotland. Although Australia may be up for debate, I feel there can be no argument about the other 3. Were Ireland to get draw them in Round 1, it would be very difficult. Luckily, there was only a 13% chance of Ireland drawing one of these teams.

There was only one more possible scenario. Northern Ireland and Republic of Ireland could have drawn each other. I'm not sure what my reaction would have bee but it would have certainly be an interesting spectacle. There was only a 3% chance of this happening.

So, as Betway's Alan Alger reached his hand deep into the barrel, it was with bated breath we waited. To face Belgium, "Number 16," he announced, which means it's going to be a cracker. Steve Lennon and Willie O'Connor will square off against Kim Huybrects and Dmitri van den Burgh. Again, I consider this to be a 'POOR' draw.

A few pulls later and it was Northern Ireland matched up against Poland. That should be a thrilling affair as well wth Daryl and Brendon facing Kyszstoph Ratajski and Titus Kanik.So, by my calculations, this is a 'DECENT' draw for the lads.

Thanks for reading everyone, this was a really fun one to make. As a side note, I hate to label teams as 'excellent' or' poor' but, for the purposes of this article, I felt I needed some kind of categories. If you are annoyed by this remember that it's darts. Anything can happen. Remember Singapore last year? The 100-to-1 longshots upset Gary Anderson and Peter Wright in the first round. As I said, it all comes down to opinions!

As always, thanks to High Roller Radio for publishing my content, I really appreciate it. But for now... 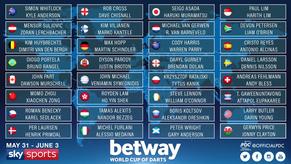